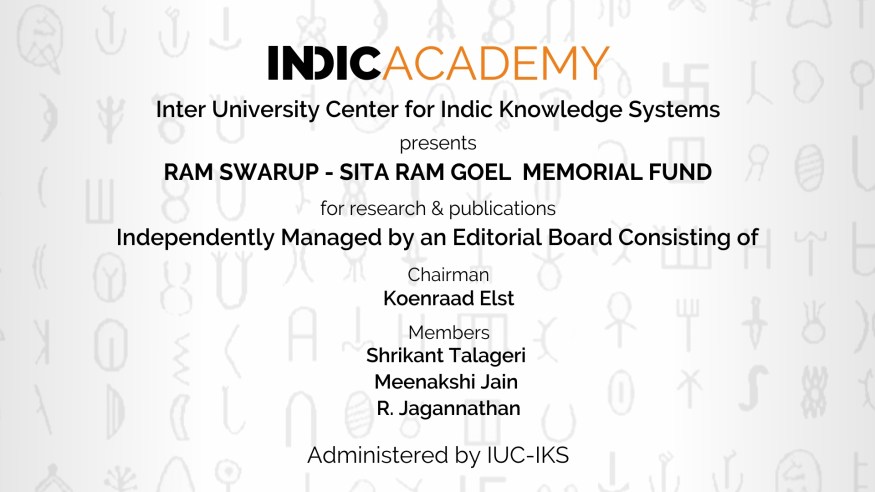 Indic Academy is honoured and happy to announce the formation of the Ram Swarup- Sitaram Goel Memorial Fund for research and publication on the  20th  death anniversary of Shri Ram Swarup. This fund will be administered under the aegis of the Inter University Center for Indic Knowledge Systems of Indic Academy. The fund will be managed by an Independent Editorial board consisting of Shri. Koenraad Elst as the Chairman and Shri. Shrikant Taalegri, Shri. R. Jagannathan and Smt. Meenakshi Jain as the other members.

Shri Ram Swarup and Shri Sitaram Goel are considered as the pioneers in the research of Indic history and politics in post Independence time frame. Ram Swarup is considered as an important thought leader for the Hindu revivalist movement. Born in 1920 to a banker father in Sonipat, Harayana his initial education was in economics and he worked extensively for India’s freedom movement.  Swarup was highly critical of the communist movement and the Communist Party. His book Gandhism and Communism  had a strong impact amongst the American policymakers as well as the Congress. Ram Swarup was a strong Gandhian for a long time and wrote extensively on the Gandhian philosophy. Initially, Ram Swarup saw Gandhism as the alternative to Communism, and he has never really rejected Gandhism. He was one of the first to publish a book on the killing of Gandhi titled Mahatma Gandhi and His Assassin. Koenrad Elst mentions “Written from a purely Gandhian perspective, its main thesis was that a society of small men cannot stand the presence of such a great man for very long: martyrdom was only befitting a man of Gandhiji’s greatness. Ram Swarup showed no interest in Godse’s motives, but he did appreciate that after the disaster of Partition, the urge to exact some punishment somewhere, though misguided (and in targeting Gandhi, misdirected), was a sign that Hindu society was not entirely dead, for suffering a calamity like the Partition and swallowing it without reaction would be a sure sign of virtual death.” In the 1970s Ram Swarup started writing more about Hinduism and other religious studies. He published books as part of in-depth studies through his publication house Voice of India. Voice of India was instrumental in publishing many well researched studies which were against the prevailing narrative of the time. Syed Shahabuddin tried to ban Ram Swarup’s book “Hindu Dharma, Christianity and Islam”.

Sitaram Goel best known for his book How I became a Hindu was a pioneering political and religious activist who wrote extensively on the damage to Indic culture and Hindusim wrought by the expansionist nature of Islam and missionary activities of Christianity. Goel toyed with communism for a little while just post independence but later abandoned the idealogy. He wrote extensively essays critiquing Nehru and his policies during the early 1960s for Organisor an RSS publication. Goel was extremely out-spoken about his views and wrote well thought and researched pieces on various subjects such as Indian secularism, media bias and Indian nationalist organisations. He wrote the book The Story of Islamic Imperialism” critiquing the history and doctrines of Islam and urged the average Muslim to evaluate the history and doctrines in the back-drop of rationalism and humanism. Many of Goel’s writings were sought to be banned when published and the Calcultta Koran Petition was one of them when he went absconding to avoid arrest.

Indic Academy is constituting a long term fund with an initial corpus of Rs. Twenty Lakhs for propagation, research and publication of studies in different areas of Indic history, culture and religion as carried out by these stalwarts. The Editorial Board will soon announce the various themes of research and scholarships open to students and researchers.