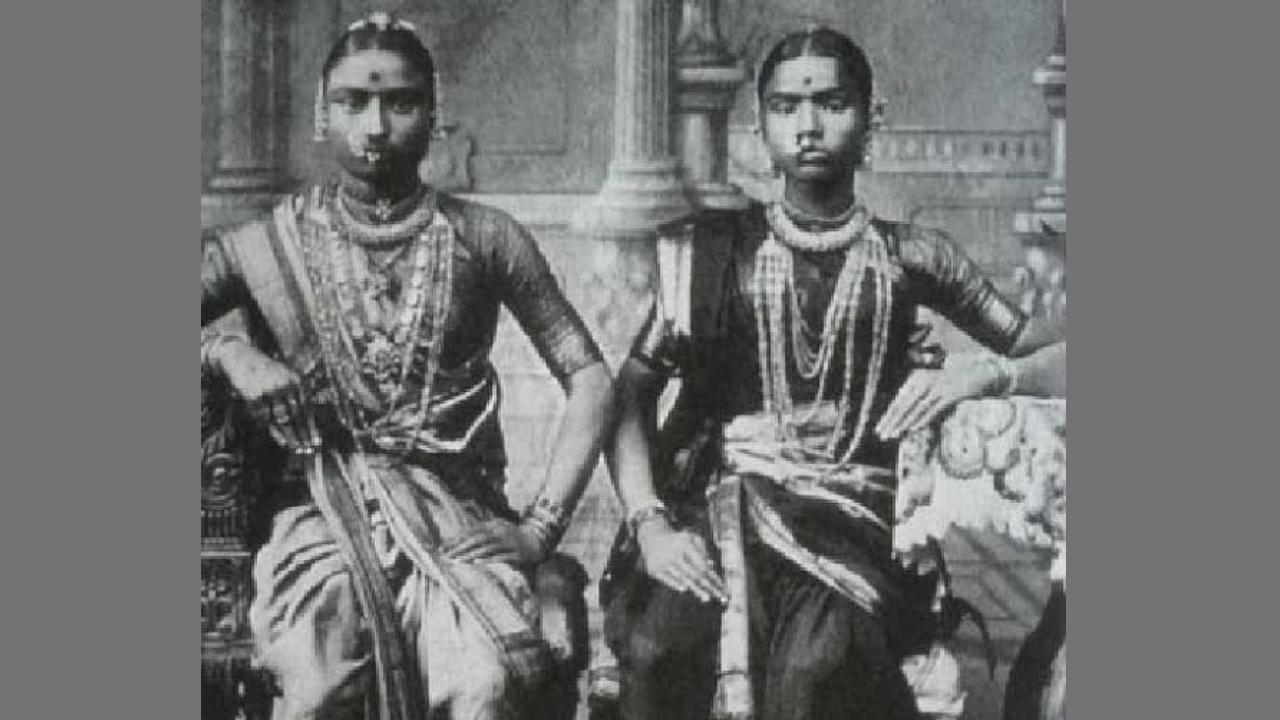 The Devadasi tradition is a part of the distinct Hindu culture of temple worship and is an example of Hindu approach to art as a religious practice and the Hindu worldview of inseparability of aesthetics and spiritual practice. Devadasi is the name given to a woman ritually dedicated to the deity of a temple to play the role of an invocation of spiritual power through her dance as part of the worship rituals of the temple. As a part of this extremely dedicated spiritual life of the Devadasis, a distinct style of ekaahaaryaka i.e.  a solo strand of Indian classical dance developed in different parts of India, particularly in South India.

While some members of the jaati were also involved in the sex service occupation along with entertaining the learned and ordinary connoisseurs alike through shaastreeya prayoga of dance and music.  It was a legal and an honoured profession in pre colonial India with some of the members also getting recognition for their skill in classical Indian dance and music as Raajanartakis or royal court dancers.

Devadasis were venerated for their spiritual accomplishment of being celibate throughout their life.This was part of their deekshaa as a  Devadasi and was required for the invocation of the spiritual power as per the temple traditions.

Today’s Bharatanatyam, Odissi, Andhra/Vilasini Natyam which are proscenium stage adaptations of this ekaahaaryaka are learnt and performed by people of all genders and of all jaatis, receiving great acclaim, while the surviving senior members of the Devadasi families are hardly seen performing their dance either in a temple or on the modern proscenium stage.These women and their girl children are found to be deeply inhibited to take up their family hereditary culture and art. Though some of them were affluent financially, their social image and self image was damaged due to the new colonized worldview of British educated Indians. Many of them also became poor financially.

What led to this situation? Why did Hindu temples and their Devadasis lose each other’s privilege and support?  At a gross level, it is the decline in the royal patronage to temples due to the weakening financial position of the local kings alongside greater control of the European, particularly the British rule over Indian society and its culture. At a more subtle level, Victorian morality of the British was also responsible for this. The same was imbibed by the colonized British educated Indian ‘reformation’ movements.These movements were supported by the reformation-masked condescending political attitude and strategy of the British. This resulted in a  misunderstanding and misinterpretation of the Devadasi tradition as a kind of ‘prostitution’. Laws were introduced by the British colonial government banning Devadasi tradition in different parts of India with names such as Anti-Nautch, Devadasi Protection, Prevention of Dedication etc.  This lead to the extinction of the traditional temple-Devadasi connection and the right cum duty of the Devadasi community. It is this Victorian morality imbibed by the colonized British educated Indians that lead to  looking down at the Devadasi tradition and a consequent low self-image of them towards their own art and tradition.

What led to the modern adaptations in the form of Bharatnatyam, Odissi etc.?  It was part of classical art revival for nationalists like E Krishna Iyer who vociferously argued against the colonial and reformist Indian misrepresentation of the Devadasi tradition. It was also a part of modernized adaptation to contemporary proscenium stage requirements for scholar-practitioners like Rukmini Devi Arundale. Meanwhile many traditional Indian performing arts have also been undergoing this new development of proscenium stage adapted form. Negating the jaati system of knowledge and skill traditions as hereditary right and duty of specific communities and arguing for knowledge and skill traditions to be the choice based was seen as a modern individual-liberty-based idea and this was applied to Devadasi traditions of dance and as such, taking the Devadasi dance out of the jaati and gender restrictions  was seen to be a progressive development just as it was seen as a progressive development for Kuchipudi dance tradition to move beyond Brahmin jaati and male gender. Particularly women of communities who were discouraged from dancing on stage viewed their participation in this tradition as their own ‘modern’ ‘educated’ liberation as women. People from non-Devadasi jaatis taking up this dance tradition viewed their own work as a protest against and the countering of stigmatization of the tradition by the British and the British educated Victorian morality bound ‘reformists’. Royal, aristocratic and other elite Indians who looked at the British women dancing in parties as their greater civilization, encouraged women members of their own families to learn and perform Indian classical dance from Kuchipudi male gurus,Rajanartaki and Devadasi female gurus and showcased it during special occasions as their elite culture.

Resistance to the misunderstanding and misinterpretation of the Devadasi tradition happened from within the community itself too through scholarly and influential women like Bengaluru Nagaratnamma. In 1927, Nagarathnamma and other devadasis established the Association of the Devadasis of Madras Presidency; she was elected its first president. She actively fought against the negative social and self image of the Devadasis. An American dancer Esther Sherman moved to India in 1930, learnt Indian classical dances, changed her name to Ragini Devi, and joined the movement to save and revive ancient dance arts fighting against their misrepresentation.

Guru Nataraja Ramakrishna spent a great part of his life in researching the original tradition behind the modern forms like Bharatnatyam, by living with the Devadasis and learning the traditional nuances from them. It is in this process that he brought to light the surviving Devadasi women of the Telugu states and their shaastra and prayoga expertise and the regionally distinct nuances of their performance technique. Famous Telugu modern poet and scholarly researcher Arudra too made similar efforts with regard to the Devadasi tradition and its regional nuances.

Research by Guru Nataraja Ramakrishna and poet-researcher Arudra resulted in what has now become famous as Andhra Natyam/Vilasini Natyam in the form of  Telugu parallel to Bharatnatyam and Odissi. Guru Swapna Sundari the famous Kuchipudi dance Guru who took to this form, in the 1990s started performing Vilasini Natyam in Sri Ranganatha temple in Hyderabad in an attempt to bring back the connection of the dance form to the temple. Dr Yashoda Thakur, who takes pride as Krishna Bhakta and did her PhD on Interrelationship between Yoga and Indian Classical Dance with Special Emphasis on Kuchipudi and who got trained by Gurus Nataraja Ramakrishna and Swapna Sundari and participated in the performances at Sri Ranganatha temple tracing her roots back to the Devadasi families, is now spearheading a movement of bringing the girls of the Kalavantulu/Devadasi families back into the performance of their dance form with the traditional sacrality and pride. A few more dancers who learnt Bharata Natyam as part of the modern day dance training are tracing back their own roots to the community of Devadasis and are striving for greater recognition for the traditional dance Gurus of the Devadasi families. In 2022, Government of India awarded Padma Shri to Smt Muthukannammal, one of the very few surviving performers of Sathir, the Tamil name for the dance tradition of the Devadasis.

While this is the background, today, there are attempts by those who otherwise have no respect for Hindu sacrality and for the system of hereditary occupations as a right plus duty, take up the cause of the Devadasis and claim  Bharatnatyam Odissi etc., as the exclusive right and duty of the Devadasi community. These movements in the name of a ‘progressive’ activity are creating conspiracy theories, hiding all the progressive, anti-colonial intentions behind the emergence of these contemporary adaptations. While it is important and essential to revive the self esteem and participation of the Devadasi families in the tradition, it is also important to revive the sacred roots of the tradition that have been vital in its survival.

With this objective, INDICA which is committed to preservation , protection and promotion of Indic traditions, is organizing a Retrospective Symposium on the Devadasi Tradition with invited talks by several eminent dance Gurus, researchers and authors who spent decades studying this tradition on Saturday, the 23rd of July, 2022 from 9:00 AM to 1:00 PM.

This symposium is dedicated to the venerable memory of Bengaluru Nagaratnamma.