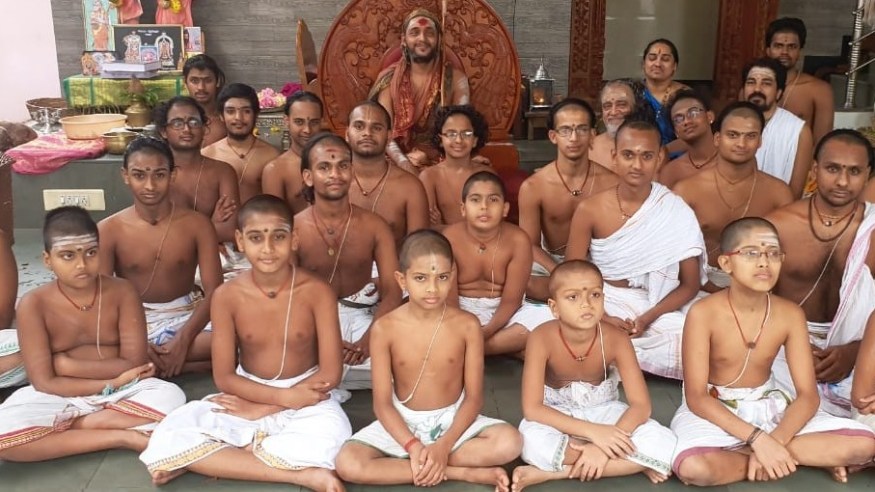 Indic Academy feels great pleasure in announcing the grant to honour one of two young vidyarthis who have completed Ghanantha Shiksha. This shall be awarded to the scholars at the 126th Jayanti celebrations of the 68th Jagadguru of Kanchi Kamakoti Shankaracharya Peetham, Sr Sri Chandrasekarendra Saraswati Mahaswamigal or Mahaperiyava. These celebrations are conducted at the Sri Chakra Mahameru Peetham, Bilaspur, with the blessings and guidance of Sri Sri Sacchidananda Tirth Mahaswamigal, Peethadhipati. The honour is instituted in the memory of Brahmasri Chandrasekara Sharma of Salem.

The Ghanapathis who will be felicitated are

Their achievement at this young age was possible due to the perseverance and the blessings of their Acharya Sri Jambunatha Ghanapatigal, the Pradhana Adhyapaka of Sri Chandrashekhara Bharati Sri Chandrashekarendra Saraswati Veda Vidyalaya Trust, Coimbatore.

Indic Academy is glad to sponsor a purse of Rs 25,000 and 4 grams of gold as a honorarium to one of these Ghanapathis.

Since time immemorial, the Vedas has been preserved primarily in the form of the spoken or chanted word. For much of their existence, the Vedas were passed on by oral teaching from teacher to pupil. All of words, sounds – consonants and vowels and tonality – or swaras were transmitted to the next generation exactly.

Various chanting techniques were developed to take care that words, sounds and tone were preserved. These techniques, in order of complexity are

For most of Krishna Yajur Veda, the progression of learning chanting techniques is from Samhita >> Pada >> Krama >> Jata >> Ghana

Let us take a quick look at what these techniques are:

1. Samhita– The corpus of the Veda is learnt as is, with no modification

2. Pada– In this style of chanting, each pada or segment of a Vedic mantra is broken up and each word repeated, with the sandhi or conjunction of two words dissolved. This ensures that each individual word of the mantra is preserved without mangling.

3. Krama– As a further technique to ensure the integrity of each word, words are split up and recited in the form ab bc cd de and so on.

These three techniques are called prakriti patha or natural form of chanting, since the words are recited once in the order in which they are found in the original mantra.

4. Jata- Vidyarthis now move on to the advanced technique called Jata Patha. It is called Jata since the syllables are braided together like hair braids. If we have a mantra composed of the words abcd,

You may learn more about these extraordinary chanting techniques here and here.

A vidyarthi who has advanced to Jata chanting is titled a Jatavallabha.

5. Ghana- Ghana is exponentially more complex than Jata chanting. There are four forms of Ghana chanting, one of which is as follows

Many vidyarthis are thus in their early twenties by the time they become Ghanapathins. This is an arduous mission that they take up in extreme youth. It involves long years of sustained study, with not more than ten-fifteen days off each year, waking at the crack of dawn every day, at least five to seven hours of chanting time and grueling examinations every few years.

Many of the children are from financially strapped backgrounds and are under pressure to begin a career in paurohitya and begin earning from their 18th year onward. Thus, to have a young vidyarthi give up five or more years of earnings at a time when their families are struggling to make ends meet is no less an emotional and financial burden on their entire family.

It is a sad travesty of our time that most Hindus have no idea of who or what a Ghanapathin is, what their learning entails are, and how important this is for the survival of our civilization. We at Indic Academy are glad to provide our support to this noble endeavour of Swami Sachidananda Tirth towards the memory of Brahmashri Chandrashekara Sharma, and for the preservation of Vaidika Dharma.