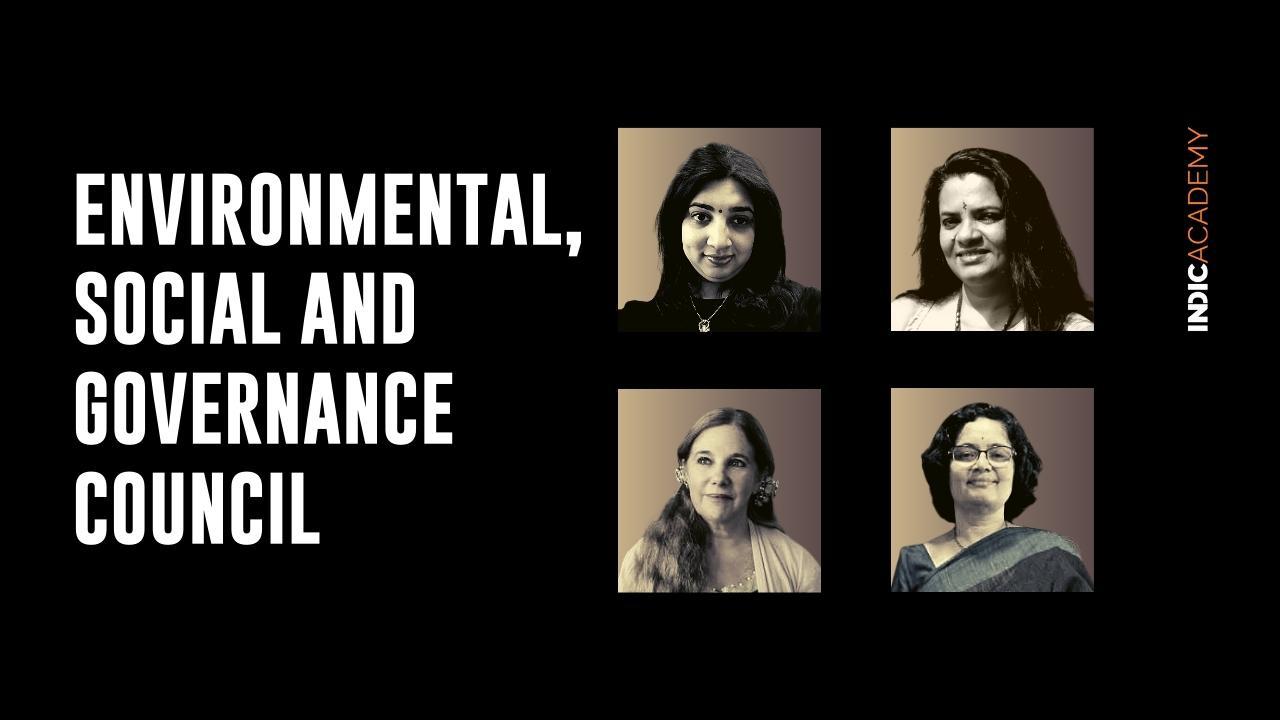 As Indic Academy (IA) enters the next phase of its mission towards ushering an Indic Renaissance, suitable governance structures are gradually being established to enable the same. An 8 member Academic Advisory Council was announced in July to oversee the academic affairs and a 7 member Governing Council was announced in August as a step towards building a shared vision, and to make decision making process driven, transparent and accountable.

Today, another important step is being taken to strengthen the governance pillars of IA as we are pleased to announce the establishment of Environmental-Social-Governance (ESG) Council. The Council comprises of the following members:

Aditi Banerjee’s first novel, The Curse of Gandhari, was published by Bloomsbury India in September 2019. She is a practicing attorney at a Fortune 500 financial services company and has also completed an Executive MBA at Columbia University. She is a prolific writer and speaker about Hinduism and the Hindu-American experience. She is a member of the Indic Academy and Indic Book Club, which sponsored a successful six-city book launch tour for The Curse of Gandhari in September 2019 across India. She co-edited the book, Invading the Sacred: An Analysis of Hinduism Studies in America in collaboration with Rajiv Malhotra, and has authored several essays in publications such as The Columbia Documentary History of Religion in America since 1945 and Buddhists, Hindus, and Sikhs in America: A Short History (Religion in American Life) (Oxford University Press). She earned a Juris Doctor from Yale Law School and received a B.A. in International Relations, magna cum laude, from Tufts University. In her free time, she enjoys wandering the Himalayas and reading voraciously.

Sumedha Verma Ojha is an author, columnist and speaker, was born in Patna and educated in Delhi, graduating in Economics (Lady Sriram College) and post-graduation in Sociology (Delhi School of economics). After 15 years in the Indian Revenue Service she switched careers to research and write a book set in the Mauryan period based on the Arthashastra of Chanakya. ‘Urnabhih’ then expanded into a book series on the Mauryan Empire. Sumedha is a Member of the Editorial Advisory Board at Indic Today. She works in the area of translating and explaining the epics and bringing ancient Sanskrit/Prakrit literature to the English speaking Indian as also in the area of a gendered analysis of ancient India. She lives with her husband near Geneva and has two children both studying in the US.

Dena Merriam is the Founder and Convener of Global Peace Initiative of Women (GPIW). Ms. Merriam began working in the inter-faith movement in the late 1990s when she served as Vice Chair of the Millennium World Peace Summit of Religious and Spiritual Leaders held at the United Nation in New York in the year 2000.  She subsequently convened a meeting of women religious and spiritual leaders at the Palais des Nations in Geneva and from that gathering founded the Global Peace Initiative of Women (GPIW) in 2002, an organization chaired by a multi-faith group of women spiritual leaders.  In 2008, Ms. Merriam was one of the founding members of the Contemplative Alliance, which later became a program of GPIW.  The purpose of the Alliance is to bring together meditation teachers and practitioners in a collective effort to uplift and transform society, while caring for and honoring our Mother Earth. For over 40 years, Dena Merriam has been a student of Paramahansa Yogananda and a practitioner of Kriya Yoga meditation.  She is also a long time student of the great texts of the Vedic tradition.  Ms. Merriam received her Master’s Degree from Columbia University and has served on the boards of the Harvard University Center for the Study of World Religions, the International Center for Religion and Diplomacy, The Interfaith Center of New York, the Manitou Foundation, The All India Movement (AIM) for Seva, Dharma Drum Mountain Buddhist Association, and Seven Pillars.  In 2014 she received the Niwano Peace Prize for her interfaith peace efforts.

Sundari R Pisupati is an attorney and is the co-founder of Tempus Law Associates, a law firm based in Hyderabad. She has 27 years of experience as a lawyer. She practiced in New York at an International law firm Sidley for several years. She has a Masters in law from Columbia Law School, New York and is NY licensed. She specializes in corporate law and handles foreign investments and Mergers and Acquisitions transactions on a regular basis. She is from the National Law School of India University (NLSIU) Bangalore from the 1st batch and is a gold medallist. She advises companies in various industry verticals such as information technology, financial services, domestic and international funds, angel funds, venture capital, infrastructure, biotechnology and pharmaceutical companies among others. She also handles matters and advises the Competition Commission of India; the Enforcement Directorate and was earlier the Counsel for GST and Tirumala Tirupati Devasthanams. She is regularly invited to national and international events to speak on various topics of current legal interest. She is a Sanskrit scholar and holds high academic records.

“Strictly speaking the constitution of an ESG Council is not mandated upon us. However we have always been ahead of the curve and in tune with the global trends. We realise the importance of ESG. Addressing issues relating to environment and sustainability,  advancing diversity and inclusivity and maintaining high standards of governance are key to building a global institution.  However in each of these areas, our civilisational thought has been denied, distorted or digested*. We therefore have a two fold challenge, one is to correct the narrative and second is to set global standards and lead by setting an  example for others to follow. We are blessed to have four extraordinary public intellectuals who will focus on Feminism, Environment, Interfaith and Governance. We will soon be adding members in the areas of Dalit and LGBTQ.”

We welcome Aditi, Sumedha, Dena and Sundari and thank them for their consent. We look forward to actively engaging with them in times to come.

*Please refer to Shri Rajiv Malhotra’s seminal thought as expressed in his various books and talks.