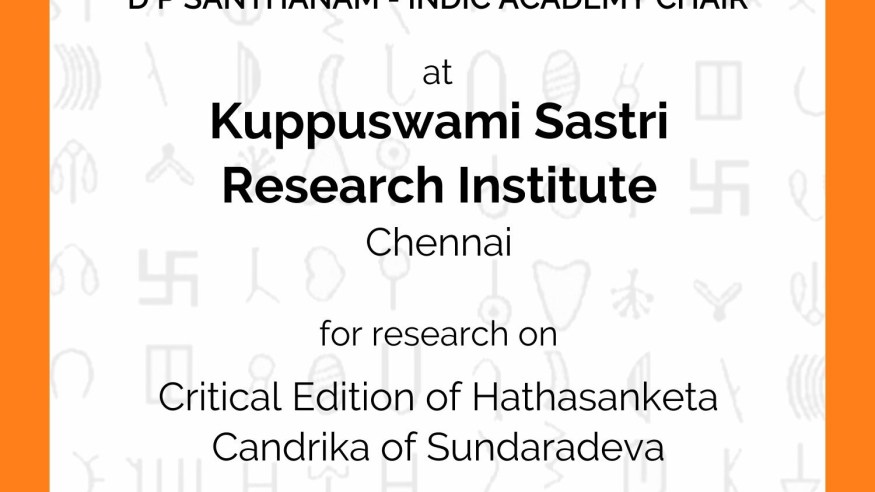 Which human being doesn’t live for own self?

But, true living is the one that’s seeped in charity.

Truer words could not have been written to describe lives like that of Shri D. P. Santhanam, a Dharmic man who lived his life with simplicity, honesty and benevolence.  As his last act of charity, he had ordained that a good portion of his savings be given away for Dharmic causes, and to honour his wishes Shri Santhanam’s family instituted an endowment of Rs 5 Lakhs in his name in 2017.

Taking his vision forward, Indic Academy is pleased to announce the establishment of the DP Santhanam- Indic Academy Chair at Kuppuswami Sastri Research Institute (KSRI) Chennai. Indic Academy converted the DP Santhanam endowment to a contribution towards this chair by matching the amounting and instituting this first chair for research on – Critical Edition of Hathasanketa Candrika of Sundaradeva; Varaha Upanishad; & Yoga Kundalini Upanishad.

The Kuppuswamy Sastry Research Institute was founded in 1944 as a tribute to the great Sanskrit scholar Prof. S. Kuppuswami Sastri. KSRI is an institute of national and international repute and is one of the three institutes in India for sustained work in the field of Sanskrit and related Indological research. As their vision and mission is of “Preserving Knowledge of Sanskrit and Indology, the core activities of the Institute revolve around –

The three scholars who would be undertaking the projects under the DP Santhanam- Indic Academy Chair are:

Dr.R.Muthulakshmi (Chair) – She is an M.A. (Acharya) Sahitya from Rashtriya Samskrita Vidya peetha, Tirupati and recently was  awarded her Ph.D. degree on the completion of her highly commended thesis on ‘Yogic Elements in Pancamahakavyas’. She has passed various Sanskrit Examinations conducted by Samskrita Pracarini Sabha (Chittoor), Samskrita Bharathi and Samskrit Educational Soceity, Chennai.

Ms.Anuradha Shivakumar (Research Associate) – She is currently pursuing her Ph.D. in the field of Samskrit (Yoga Shastram). Anuradha has completed her M. Phil in the same field and has earlier obtained Post Graduate degree in Public Administration from Madras University & Post Graduate degree in Samskritam from Karnataka State Open University. Her current projects involve – Taking Bhagavad Gita and Samskrit classes at various levels; Critical edition of hitherto unpublished Yoga manuscript “Amrita- siddhi-yoga”of Virupaksha; and Delivering periodic lectures on Patanjal’s “Yoga Sutras” at the Heartfulness Institute, Babuji Memoral Ashram to the practitioners of Yoga from across the globe.

Ms.Mythili (Research Associate) – Mythili has obtained her M. Phil in Yoga from KSRI Chennai and before that had completed her M. A. in Sanskrit from SASTRA University, Thanjavur. Her current projects involve – publication of “Yogakundalyupanisad” with Roman Transliteration and English Translation; Participating in the publication of “Kiratarjuniya” with Tamil translation; and Collecting data for publication of Dictionary of Geographical terms in the Puranas. She has passed Sanskrit examinations conducted by Samskrita Bharati and Samskrita Pracarini Sabha (Chitoor) and has participated in the National Seminar on “Indian Spiritual Heritage through Sanskrit Devotional Literature of South India” conducted by the Department of Sanskrit, Pondicherry University in collaboration with Indira Gandhi National Center for the Arts, Regional Centre, Puducherry, and presented a paper titled “Nirvana Satkam”.