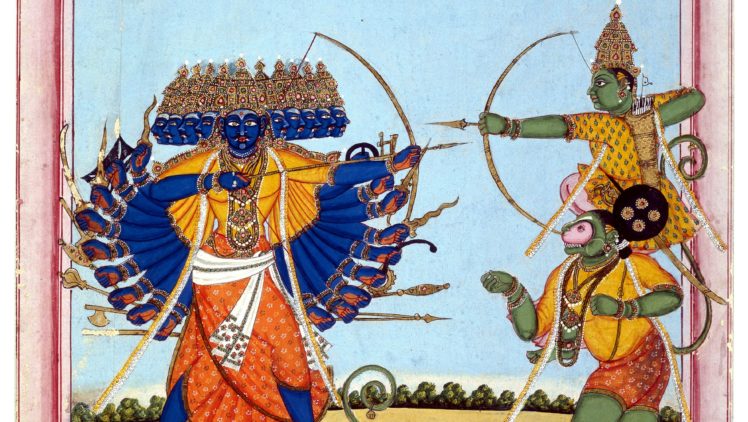 The Ramayana has inspired the culture and faith of the Indian sub-continent from time immemorial. From here, the story of the Lord of Ayodhya moved to neighbouring countries taking on the tone and colour of the local traditions. The story is seen and heard in Thailand, Malaysia, Cambodia, Indonesia, Laos, Singapore, Burma, Sri Lanka depicted in the form of literature, relics, manuscripts, mural paintings, dance and drama.

Royal connections to Rama can be seen in Thailand and Korea. The title of Rama constantly re-occurs in the royal genealogies of Thailand. According to a Korean legend, Princess Suriratna, also known as Heo Hwang-ok, went from Ayodhya to Korea in 48 AD, some 2000 years ago, and started the Karak dynasty by marrying a local king.

In both Thai and Lao traditions, Hanuman was part of a favourite Yantra design used by soldiers and martial arts specialists. The leader of the vanara army represents strength, stamina, agility, intelligence and devotion.

The Center for Soft Power invites research applications to study the various aspects of the spread and popularity of the Ramayana in South East Asia beginning with a time-line dating how and when it was taken abroad by pilgrims and traders.

We also invite research into the worship in temples dedicated to Sri Rama and his family and ofcourse everyone’s favourite – Hanuman. The songs and epics written in different languages which serve as a testimony to the power of the Ramayana can be studied in terms of literary value, artistic representation and universal values.

Interested research students and scholars may send the statement of interest to namaste@centerforsoftpower.org. Remuneration will be discussed and finalized with the selected Scholar.