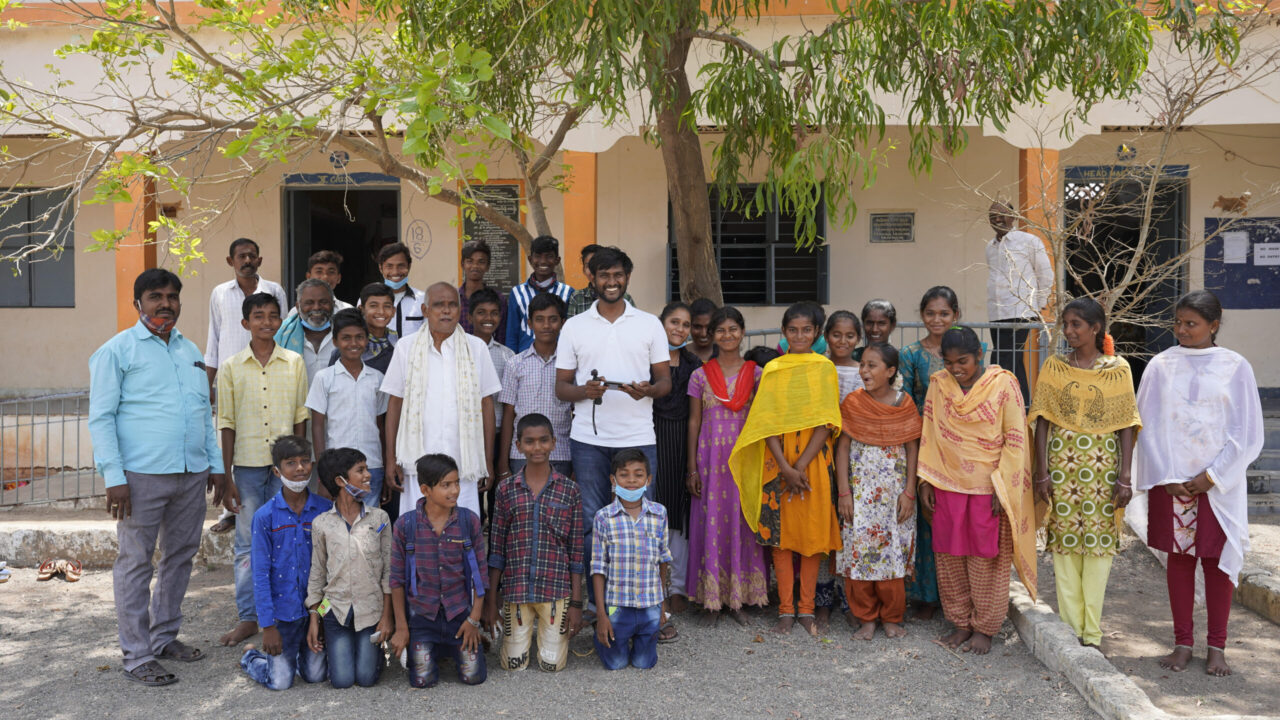 Center for Embodied Knowledge is pleased to announce a long term collaboration with National and State awarded “Shilpguru” Sri K. Siva Prasad Reddy for construction of a studio in the village of Tangaturu, Kurnool District, Andhra Pradesh and to nourish a new generation of Kalamkari artists. 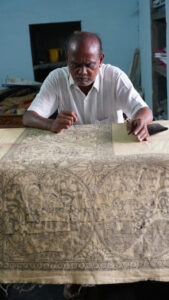 ShilpGuru Siva Prasad Reddy at work in his studio

G.Srikar Reddy, an Engineer, then a Young India Fellow from Ashoka University, who has deeply immersed himself with Shilpguru and his work will also be actively engaged in this collaboration, especially in the area of promoting Shilpguru’s work through documentary films, coffee table books and exhibitions. 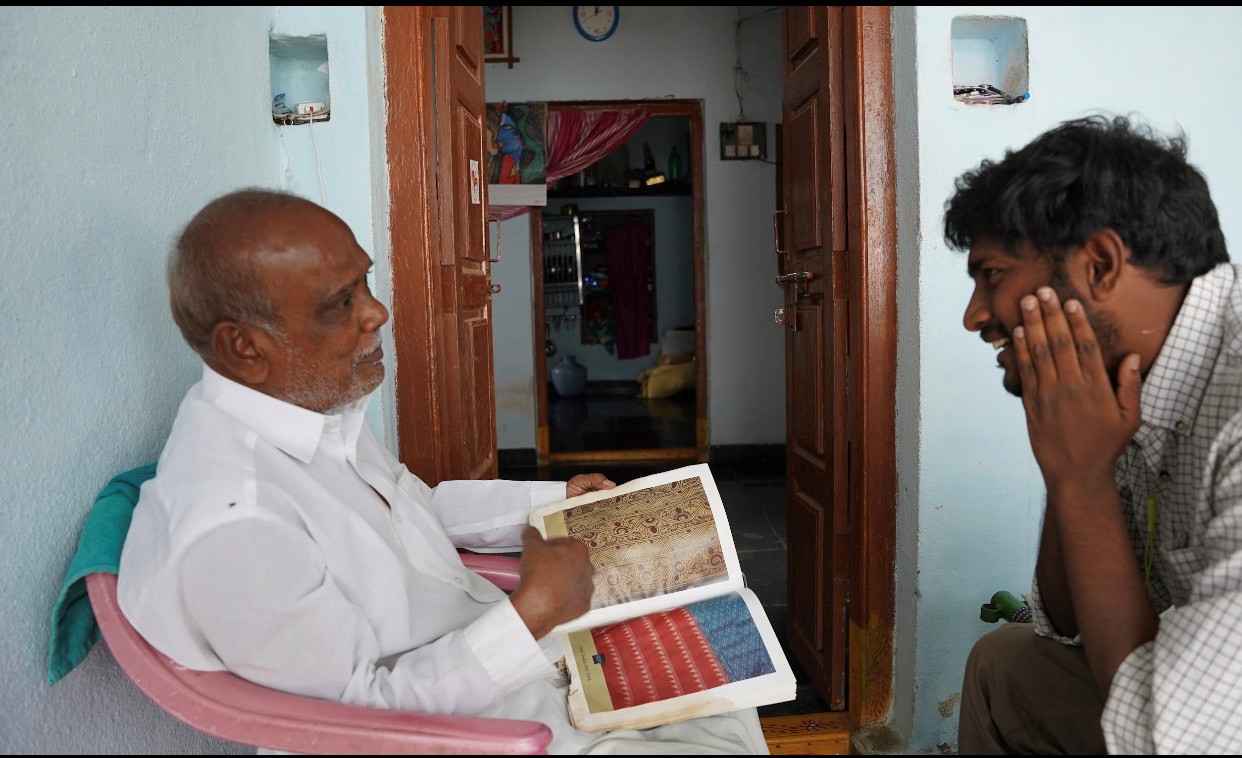 This is a part of CEK’s ongoing commitment to work with the Gurus of craft in their own location and in partnership create multiple possibilities of traditional indigenous knowledge transmission.

Shilpguru Sri Kasi Siva Prasad Reddy was born in a small village called Tanguturu in Banaganapalle Mandal, Kurnool District of Andhra Pradesh in the year 1956.Although he was born into a family which traditionally practiced farming, his early interest in drawing led him to dream of a career as an artist. 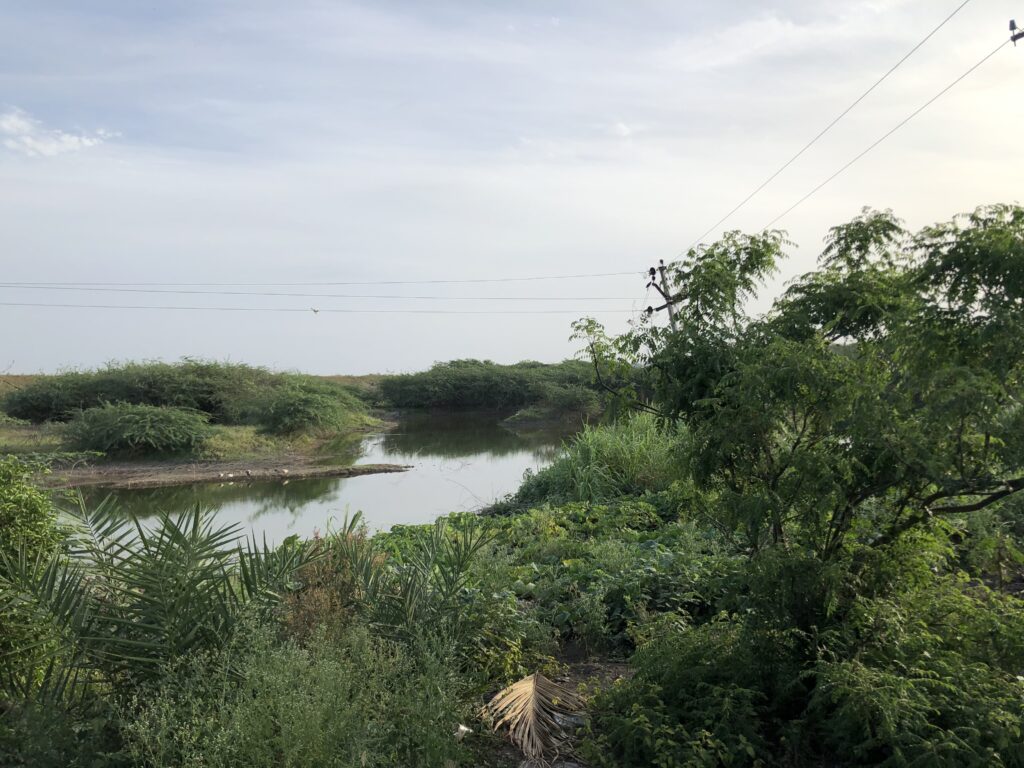 Pond behind the CEK Kalamkari Gurukulam

Due to poor socio-economic conditions, his father forced him to discontinue his education when he was studying tenth class. Then, he worked as a farmer for six years in his village while continuing to practice art as a hobby strengthening his interest.

In 1978, he found an opportunity to become a professional artist in the form of an advertisement in the daily  newspaper which invited art enthusiasts to receive training in Kalamkari at Sri Kalahasti. But, his family outright dismissed the idea to pursue Kalamkari as a profession and forced him to continue farming in the village.

He was determined to become a Kalamkari artist and left the village for Sri Kalahasti without letting his family know his whereabouts. With great difficulty, he got admission into the Kalamkari training center but he was not offered any stipend.

He worked extremely hard under his Gurus to understand the essence of the traditional art form and completed the two-year training at the Sri Kalahasti center.

In 1980, after his training, he joined as a teacher in the Kalamkari training center set up by a non-profit organization called ‘Aware’ in Padakal village near Hyderabad.

He gave Kalamkari training to local youth and tribal women for ten years and helped hundreds of them secure livelihoods. While working there, he continued his education and completed his 10th class, T.T.C in drawing (higher grade), and obtained a BA through Open University. 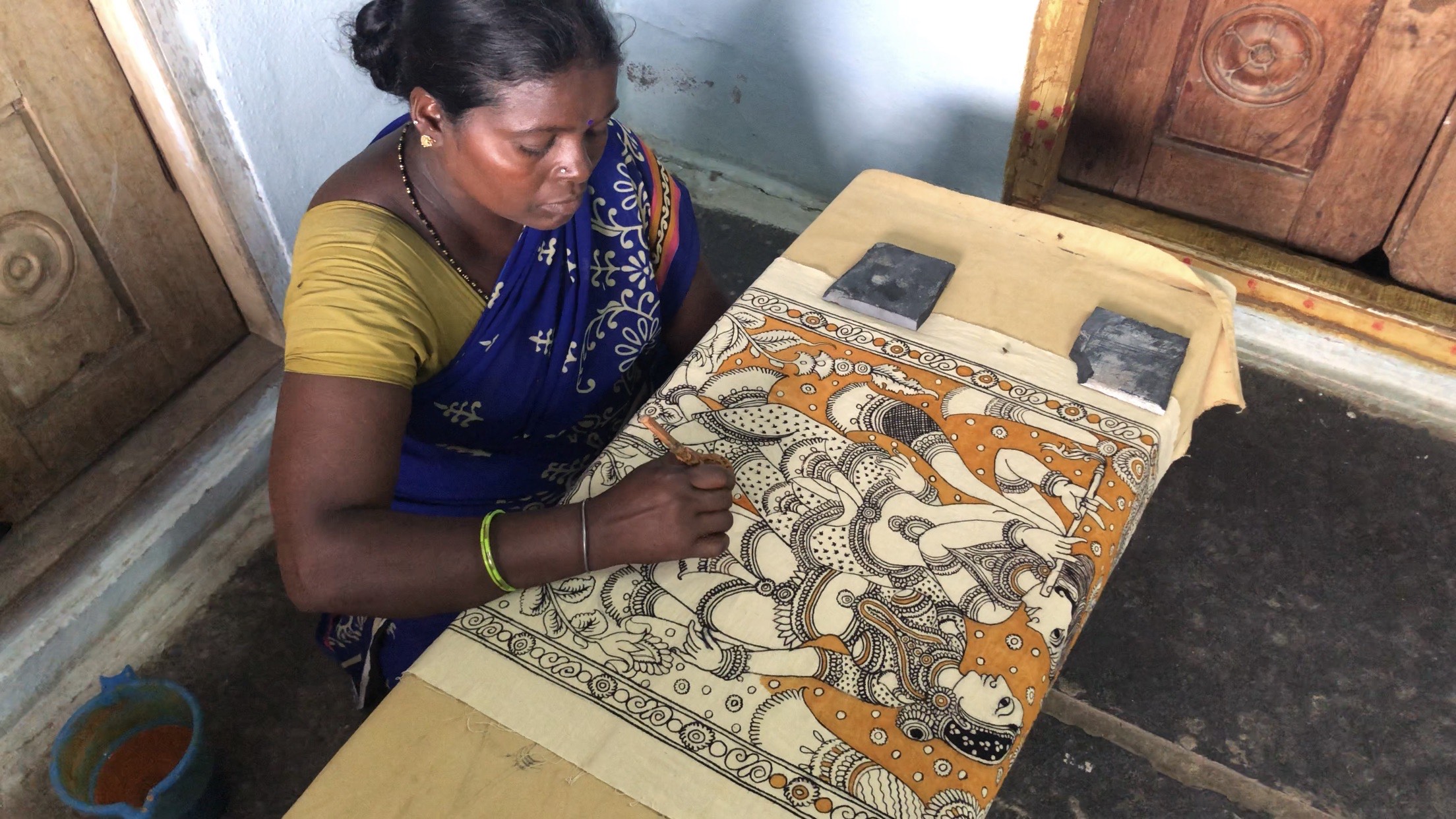 In 1990, he returned to his village and established ‘Kalamkari Kalakshetram’— a training and production center— where he has been producing Kalamkari artworks and training youth and housewives in his village interested in learning the art.

The Kalamkari artworks created by him and his shishyas were supplied to AP Handicrafts Development Emporiums, and exhibitions conducted by state and union governments across major cities in India.

Throughout his career, he has been working both as an artist and a teacher.

He has trained around 6000 students and teachers through workshop programs conducted by the CCRT, APHDC, and other cultural organizations across India. 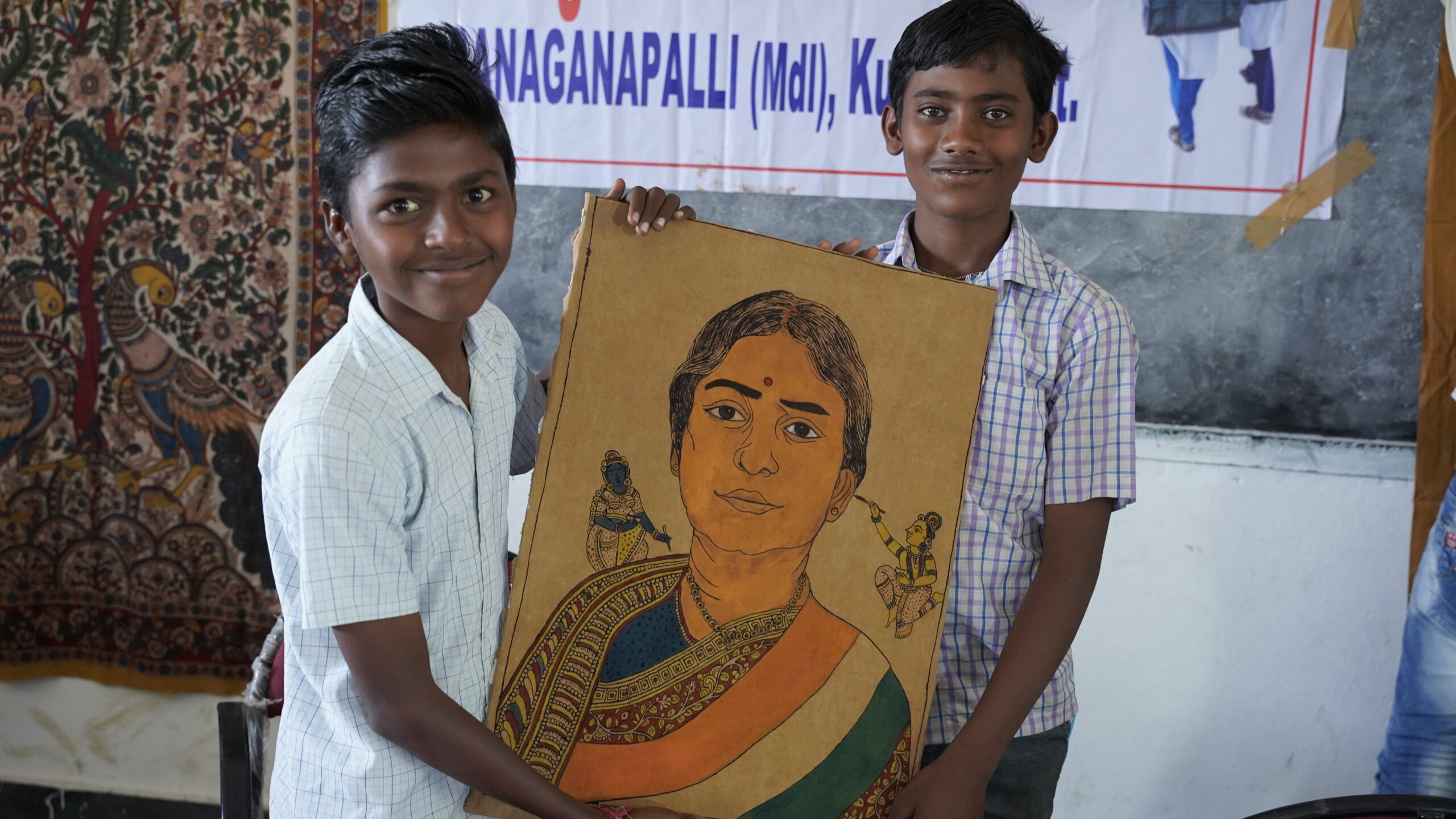 Each year, he trains new Kalamkari artisans in his Mandal to provide them a livelihood, and art enthusiasts from across India come to his village to learn and appreciate the art.

Throughout his career, he strived to bring innovation rooted in traditional wisdom into Kalamkari. He has brought in several new mythological stories, new forms of Tree of Life, and innovations in the natural color dyeing process.
He illustrated the entire life of Buddha on cloth in Kalamkari tradition for the first time. In 1995, he received the Andhra Pradesh State award from the hands of chief minister Sri N.T. Rama Rao for his work on Buddha. 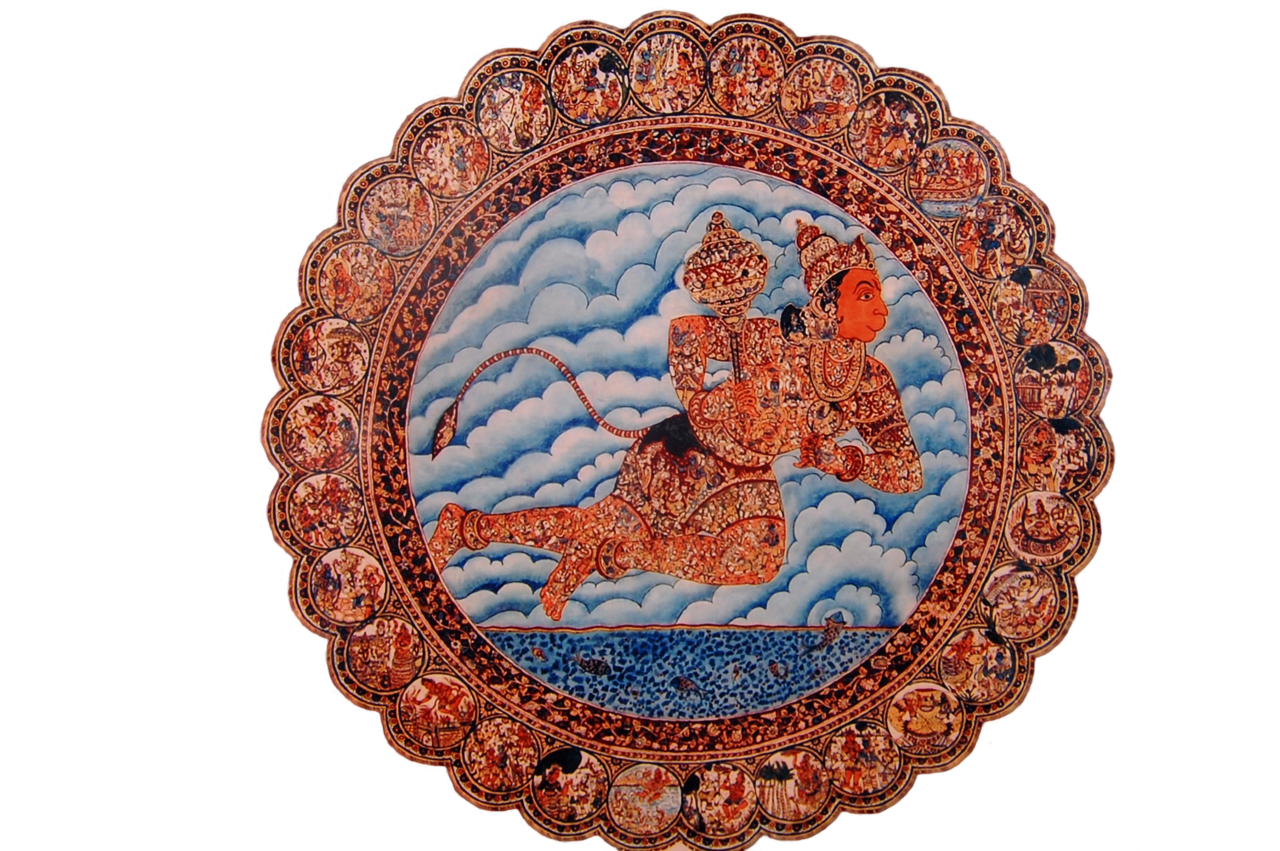 His artworks combine intricate traditional craftsmanship with compelling visual storytelling with the intention of both entertaining and educating the viewer. He has painted tapestries depicting the wondrous cosmic figures of Sri Krishna, Buddha, Hanuman, Ganesha, etc. revealing their entire stories within their respective divine forms.

In the year 2007, he audaciously painted the world’s biggest Kalamkari painting which received a place in the Limca book of records for his achievement.

In one cloth he depicted the entire Ramayan, Bhagavatam, and Mahabharat.
With dimensions of 47 feet wide and 11 feet in height, it has around 2000 figures and 210 illustrated episodes from the Indian epics. It took over two years to make and he had to sell off three acres of his farmland to fund the project. The artwork in its content and form represents the best of Indian ethos and the Government of India sent it as one of six exhibits as part of Indian representation at the China Yiwu Imported Commodities Fair held in May 2018.

The masterpiece also received appreciation from Prime Minister Narendra Modi when it was exhibited in the Textile India exhibition held in Gujarat in 2017.

In 2015 he received the ‘ShilpGuru Award’ from then President of India, Pranab Mukherjee for his ‘Weaver’s Village’ artwork which depicted the traditional Indian village with various craftspeople co-existing in harmony before modernity. 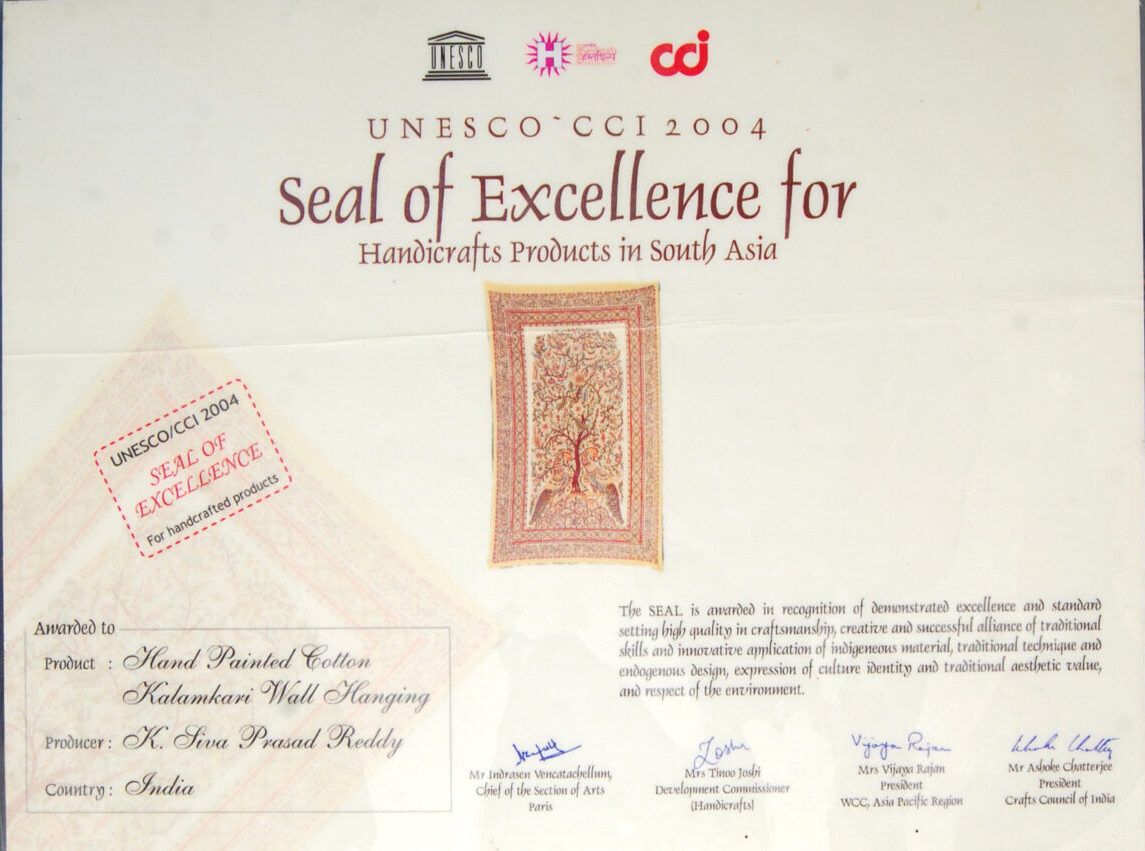 He received almost all the awards given to craftspeople by the Union government (National merit award, National award) and Andhra Pradesh State government (State award, Kalaratna) for his illustrious contributions to Kalamkari tradition.

In 2021, the Government of Andhra Pradesh presented him with the YSR Achievement Award for his excellent contribution to the field of Kalamkari Paintings.

For the past year, he has been illustrating Rabindranath Tagore’s stories and other innovative illustrations in Kalamkari for a to-be-published book on Ecological philosophy by Dr. Aseem Shrivastava. 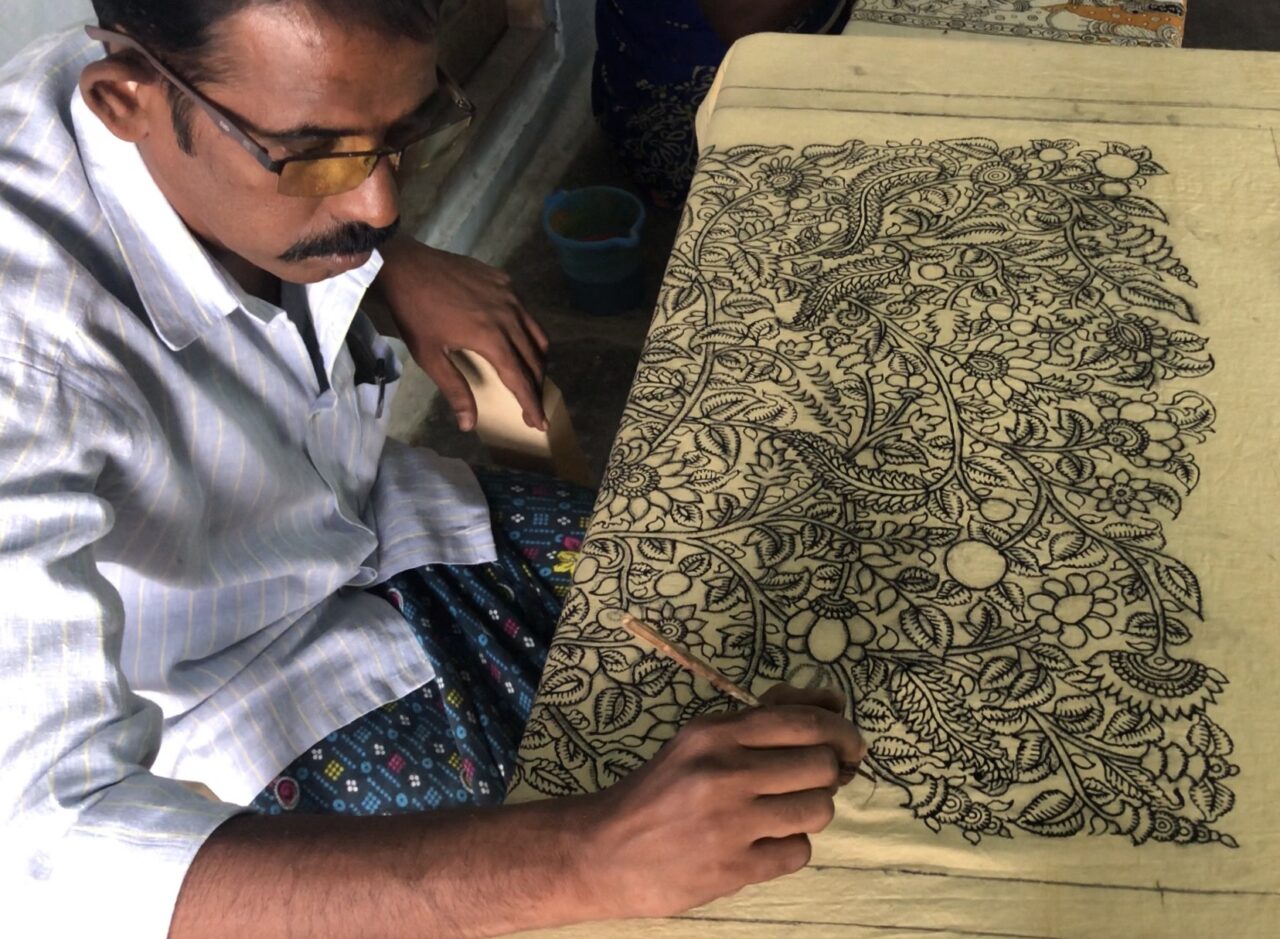 The center has provided employment and skills for hundreds of rural people for over three decades and will continue to do so in the coming decades.

Due to the efforts taken by the center in creating employment and training in Handicrafts, the Banaganapalle region is recognized by the Andhra Pradesh Handicrafts body to be one of only two regions where hand-drawn Kalamkari still flourishes.
The center enabled Guru Garu and his shishyas to experiment with new natural dyes and bring back into practice the traditional organic methods used in the practice of Kalamkari.

His innovative Landscape artwork in Kalamkari was collected for the museum of Devi Art Foundation, New Delhi.

The center witnessed bringing of many mythological stories newly into the Kalamkari Chitrakatha tradition.

The institute pushed the limits of the Kalamkari art form when he and his shishyas painted the world’s biggest Kalamkari painting depicting the entire Ramayana, Mahabharat, and Bhagavatam for over two years.

The masterpiece represents an unprecedented level of mastery and dedication in Kalamkari.

In June 2021, his artwork ‘Srinivasa Kalyanam’ was acquired by the Takshila Education society for the newly founded, Takshila Museum of Art, New Delhi.

The center symbolizes a deep understanding of Indian spirituality and uncompromised excellence in craftsmanship.

Currently, it serves as the workplace for Guru Garu, two of his closest shishyas who have been practicing Kalamkari for over 25 years, and an apprentice.

The Center’s building had become old and needed to be built again and now will be known as CEK Kalamkari Gurukulam.