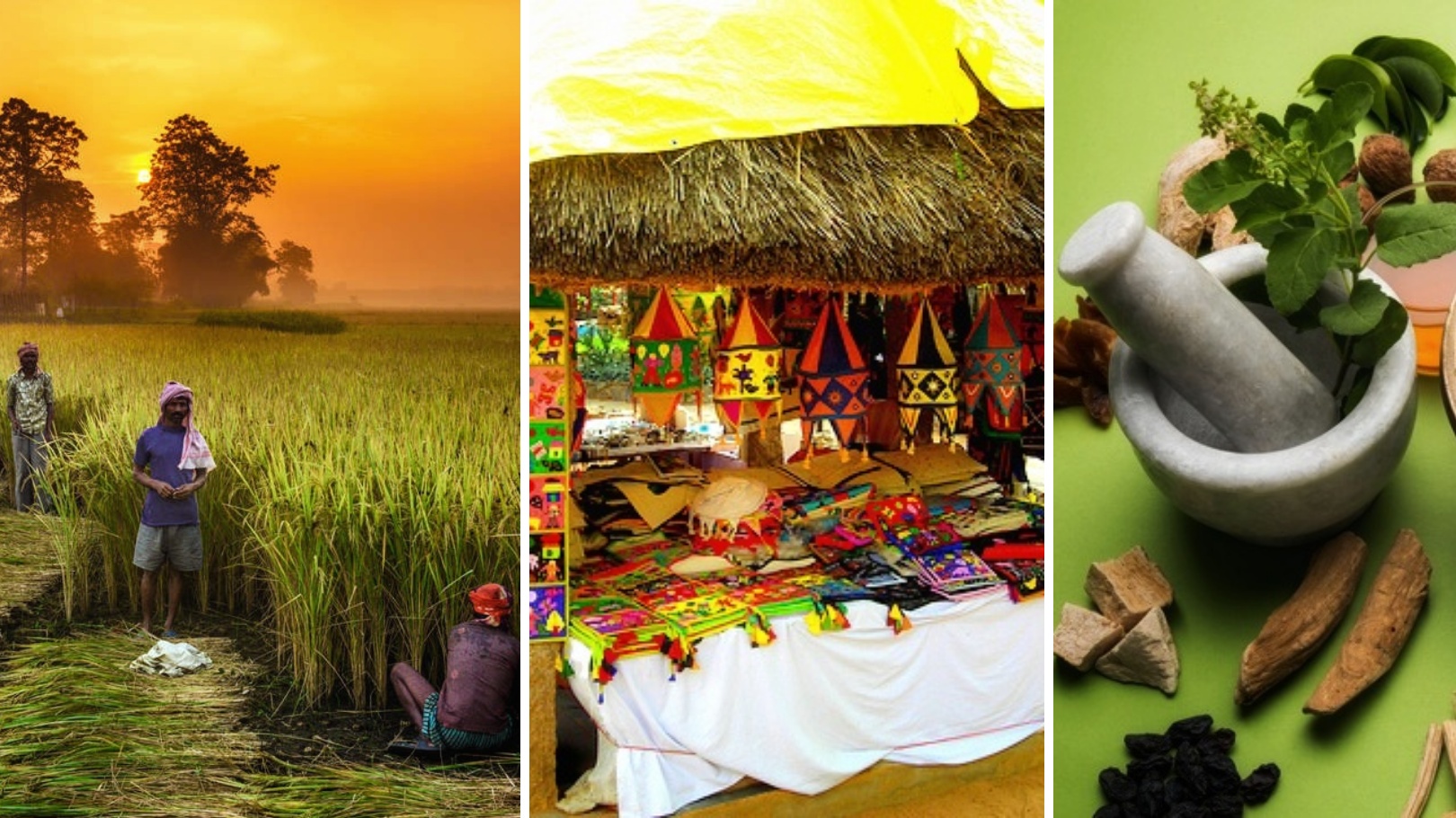 As its very first act, the recently formed Center for Indigenous Sustainability is pleased to announce a Short-Term Research Fellowships. We invite public intellectuals, research scholars, academics to come forward and apply in the following themes mentioned below. The research program will be guided & mentored by Rahul Goswami and Viva Kermani. Selected candidates will be suitably remunerated on a monthly basis. Please send in your CVs to namaste@indica.org.in

The following themes are being offered :

I) Agriculture and Food

1. Local Foodways,- Their Histories and Transformation.
The food traditions of a local region include grains, legumes, vegetables and milk products that to a significant degree determined the mix of cultivable crops and foods in that region. Where the transmission and symbolism of the culinary range of foods was strong is also where the diversity of cereals, legumes and vegetables was high. Today, the diversity in many cultivating regions of India has shrunk, and the culinary range remains feasible only through the substitution of original crops with those from elsewhere. Food traditions and the socio-cultural forms they take (foodways) are best understood and traced locally (district/town) through the consulting of written material (recipe books, where these have been printed, between two and three generations ago, and collections of recipes maintained by households, which were sometimes called ‘rasachandrika’), and through conversations with, especially, an elder generation whose memories of foods, their meaning and their source are still reliable. The study will examine how food culture (or a foodway of a region) has changed in living memory and in textual memory, and what that change evokes in those interviewed or consulted.

2. Prasadam as a Template for Diversity in Crop Cultivation.
Food is offered to the deity in temples at the times prescribed by the applicable agama shastra, which also prescribes the quantity, composition, and variety of food. Typically, sacred food is not meant to be consumed as a meal or to quell hunger, but is to be taken in small quantities as a blessing. Such foods (laddus are a very common example) are ‘naivedyam’. Milk, ghee, rice (pongal), curd, sugar (jaggery/gud) are some of the common naivedyam. Whereas during the British colonial occupation the effects of the various kinds of land ‘settlements’ dramatically altered the patterns of cultivation, foods required by temples for ritual purposes were acceptable provided they fulfilled criteria that began with how they were cultivated. The study will rely on the practices followed in two or three temples in a region (district or smaller/town) with regard to the purity of the naivedyam from the cultivation stage. Modern India has tended to, even where agamic injunctions about foods for naivedyam or prasadam or abhishekam are followed, procure from the market. The study will however examine the food purity strictures as an agri-biodiversity conservation method.

1. Inherent Sustainability of Crafts-Utility Products.
The ‘moonj’ grass coiled baskets of Prayag, the bamboo in Assam’s barak valley and in Jharkhand, the potter (‘kumbhar’) communities of Deccan Maharashtra, the ‘kora’ mats of southern Tamil Nadu, are examples of natural materials transformed into products of local utility. The use of these products, whose extraordinary variety of forms and materials is still not fully documented, and their continued local manufacture signal the vitality of a locally self-reliant economy that is inherently sustainable. Of the 17 UN Sustainable Development Goals (to which India is a signatory country), nine are connected with handicrafts, hand weaves and rural household industries. Unlike mass-manufactured products that have replaced these – plastics and synthetic fibres being predominant, but also recycled metals and fibreboard – the utility crafts products have no heavy environmental footprint. The study will (in a district/contiguous tehsils) identify such crafts-utility products and trace their material origin and transformation. It will also enquire into the true cost calculations of crafts-utility products and of the mass-manufactured products that they compete with, together with an assessment of the awareness of environmental costs and benefits of crafts-utility products among consuming households and producing organisations.

Craft has a dual purpose, outwardly for utility, inwardly for delight. The function of form is to manifest the meaning within its material. Whether as silpi-vidya or as shilpacharya or as karigar, the creator of a handicraft, or of a woven textile, or a household artisanal product (which may be as humble as a cane storage basket, or as unique as a finely decorated silver snuff box) embodies these aspects in a material object. In modern India, these objects tend to be considered as ‘handicrafts’ rather than being decorative, or adornment, or ritual or functional objects, yet embodying meaning and a tradition of knowledge. As the term ‘handicraft’ has relegated these objects and products to a lower tier in the economic hierarchy, and associated their creation with ‘informal’ labour, their value has been diminished and their aesthetics overlooked. Moreover, they ‘compete’ mostly for sameness in function, with factory-produced objects made out of new materials. The study will enquire, through discussion with crafts and hand-made fabrics organisations, especially with their master craftsmen, but also by querying purchasing households and individuals, in a selected region, about the creators’ and owners’ perceptions of such objects, and the place they occupy in their living spaces and daily lives.

1. Central or Alternative? Ayurveda’s Place in Healthcare Perception.
Since 2014, when the former Department of Ayush became a ministry, the public health system hospitals have registered no more than about 10% of the number of patients they treat as choosing (or being directed to) Ayush practitioners in the hospitals. Outside the public health system however, ayurveda appears to be gaining in popularity as a healthcare choice amongst all income groups. While the western allopathic and medical instrument/devices-based healthcare system is supported by an abundance of documentation and surveying of the patient base, medical professionals, healthcare financing, medical education, and healthcare and drugs regulation, the corresponding documentation and surveying for ayurveda is scant. This scarcity is what the study will help reduce. The chosen study area (district/town/metro ward) may be mapped for public and private healthcare infrastructure and practitioners. Using in-depth conversations with practitioners and vaidyas, and their patients, the study will uncover the choices, influences, sources of information and factors that allow (or hinder) ayurveda to flourish as a healthcare choice.

2. Conservation and Strengthening Ayurveda’s Botanical Basis.
There are about 450 species that form the most common set of medicinal plants from which the great bulk of the today’s ayurvedic formulations are made. Although this set represents a small portion of the botanical richness that can be represented by all the extant ayurveda schools and knowledge traditions of India, the growing popularity of ayurvedic medicines and preparations, whether these are consumed under the direction of a vaidya or purchased over-the-counter because of tacit knowledge of their efficacy, requires that the botanical basis be attended to. Local medicinal histories indicate that town or village pharmacies with their own formulary units (sometimes ‘rasashala’) secured their raw materials through arrangements with collectors of forest and hill slope species. The study will identify one or two (in a district/contiguous tehsils) extant and well-functioning ayurvedic aushadhalaya with their formulary units (whether integrated or not) and determine the viability of their raw material sources, efforts being made to conserve these in a state of purity (free from pollution and synthetic fertiliser), and the determinants of botanical supply.