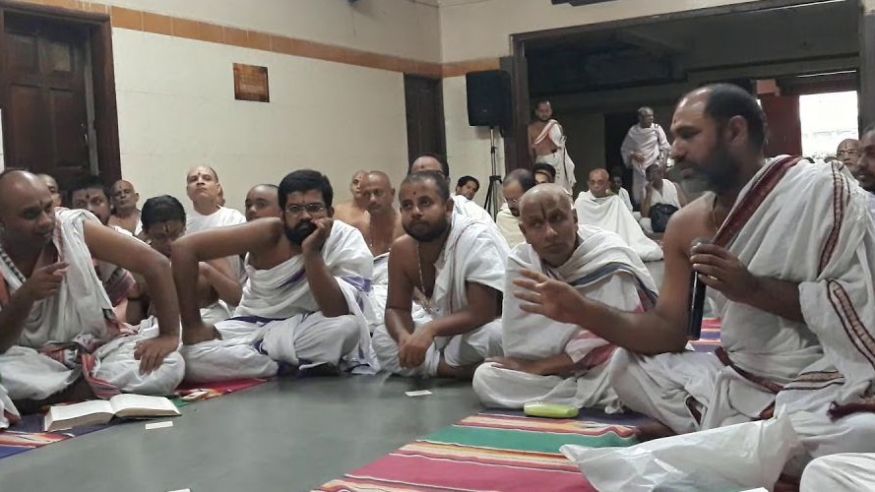 Indic Academy’s Inter-Gurukula University Centre in collaboration with Bharatiya Shikhan Mandal and under the auspices of Sampurnanand Sanskrit University is proud to present the 1st International Vakyartha Sabha. The Sabha will be held in Varanasi from the 12th to the 14th of July.

Sadas is a formal but affectionate assembly, especially of scholars. Vakyartha is a format of sadas. A proposition about a highly minute and profound aspect of a shastra is made by one of the members of the assembly. Arguments for the proposition and counter against all the possible objections to the arguments are also presented. A rigorously methodological and critical questioning of the validity of the same as per that shastra is done by the remaining members. The member defends his proposition using the rigorous dialectical and critical methodology referencing from all the relevant vast, deep and intricate aspects of the shastra. Such sessions are usually relished by the audience.

Though various Vedic disciplines such as Mimamsa (hermeneutics), Nyaya (logic), Vyakarana (grammar), Vedanta (liberation) etc. have vakyartha as part of their tradition, the origin of the name vakyartha for such a session could be in Mimamsa which took the interpretation of the meaning(artha) of statements(vakya) to the pinnacle of meticulousness, rigour and intricacy. Such assemblies were a part of the guru-shishya parampara of the discipline. Mimamsa interprets all the statements whether adulatory, narrative or of any other form as injunctions or instructions (vidhis = prescriptions and nishedhas = proscriptions) to perform yajnas (sacrificial fire-offerings) and other karmas (actions) that lead to Dharma (universal and eternal order) .

It has been a Vedic tradition to accept one as a true scholar in any of the Vedic shastras only after one establishes oneself in the august presence of established or peer scholars in such sessions.

Vakyarthas have been believed to contribute to shastra vriddhi, development of the shastra.

Varanasi as the venue

Varanasi has been the global shastric study capital from millennia. There has been an unbroken and vibrant guru-shishya parampara for all the shastras here. There have been griha gurukuls where teacher runs a residential school at his own home and gurukuls where a group of gurus run a multidisciplinary school under the leadership of a kulapati. There was always a huge number of such places of learning at any given period of history. Verdicts on shastric disputes, conclusions on shastric discussions and certification for shastric learning given from the elite body of Varanasi scholars was always considered as the most authentic, unquestionable and final. Even today Varanasi is an abode of a huge number of modern universities including those specializing in Sanskrit and Vedic studies apart from a significant number of traditional gurukuls continuing from time immemorial. For this unprecedentedly big vakyartha, Varanasi is thus an ideal venue.

The proposed Varanasi vakyartha sadas shall have the largest number of pandita participants assembled so far. Contrary to the conventional practice of elderly scholars doing Vaakyaartha, young scholars will be performing Vakyartha in this sadas and elder scholars are going to be listeners.

Vaisesika and Ganita shastras have also been included in Vakyartha sabha for the first time with the intent of nurturing scholars in the Indian schools of Mathematics and Physics. Historically, Yoga has never been a part of Vakyartha, but with Yoga going global in the present age, this Sadas will also have discussions on Yoga

This time, the Vakyartha will also include participants from Nepal and Bhutan. For the first time, Ishti and Avadhanam have also been added to the Vakyartha. Other events to be held include a three day workshop on developing a curriculum for ArthaShastra, Ayurveda and Dhanurveda. Agnihotris from Nepal will also be conducting the MitravindaIshti – an ancient and rare yajna.

Indic Academy has provided a grant of Rs. 5 lakhs and with the help of it’s Indic Activists Network is looking to raise additional funds of Rs. 5 lakhs via crowdfunding.
If you wish to help support this ancient tradition of Vakyartha Sadas, please contribute towards the same.