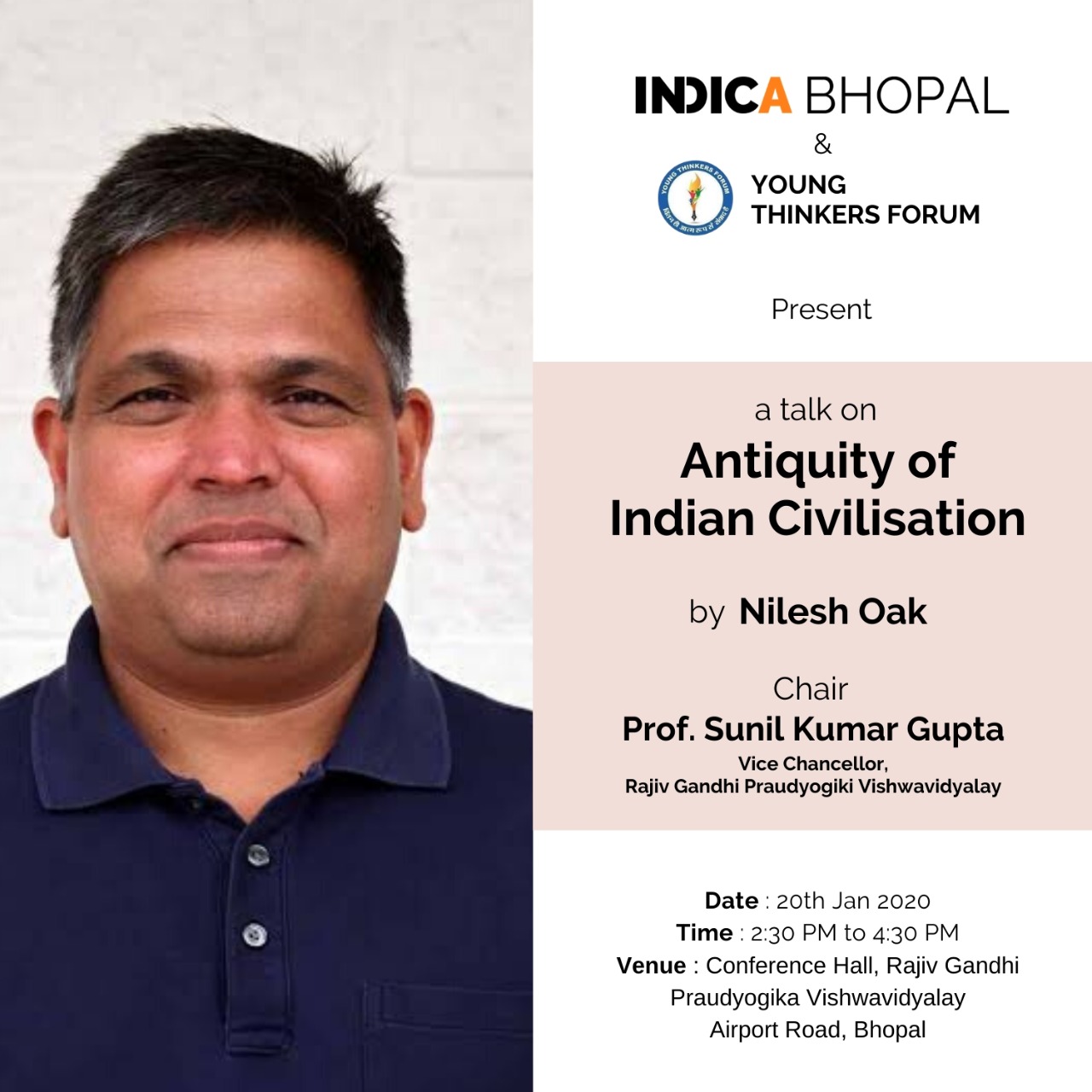 Indica Bhopal, in association with Young Thinkers Forum, is organizing a talk on ‘Antiquity of Indian Civilisation’ by Nilesh Oak. The session will be chaired by Prof. Sunil Kumar Gupta, Vice Chancellor of the Rajiv Gandhi Praudyogiki Vishwavidyalay, Bhopal.

Prof. Nilesh Nilkanth Oak researches on ancient civilizations, Indian epics and philosophy and has made revolutionary contributions to the dating of Rigveda, Ramayana and Mahabharata. He has worked in corporate world for 20+ years in Sales, commercial operations, executive corporate training; and holds BS, MS in Chemical Engineering and Executive MBA.  Nilesh is Adjunct Professor at Institute of Advanced Sciences, Dartmouth, MA, USA.

Nilesh is described as the most scientific Indologist of our times for his work on ancient Indian civilization. He researches in dozen plus multidisciplinary areas of hard sciences. Nilesh helps Indians become aware of the deep antiquity of Indian civilization so that they truly comprehend, present, or defend the grand narrative of India unlike most other Indic researchers because he builds it through scientific acumen and logical reasoning.

He has authored several books like, ‘When did the Mahabharata War Happen? The Mystery of Arundhati’ (2011), ‘The Historic Rama: Indian Civilization at the End of Pleistocene’ (2014) and ‘Bhishma Nirvana – An Astronomy Poison Pill’ (2018) where he freshly evaluated astronomy observations of the Mahabharata and the Ramayana. His work led to the validation of 5561 BCE as the year of the Mahabharata war and 12209 BCE as the year of Rama-Ravana Yuddha.  His work on Rigveda has led to validation of oldest portions of Rigveda to be older than 22,000 BCE.

His first book was nominated for the Lakatos Award, which is given annually by the London School of Economics for an original contribution to the philosophy of science. Nilesh researches in astronomy, archaeology, anthropology, geology, genetics, paleontology, ancient narratives, and philosophy. He writes on ‘Ancient Indian History’ through his blog.

The Talk is free, and open for all.