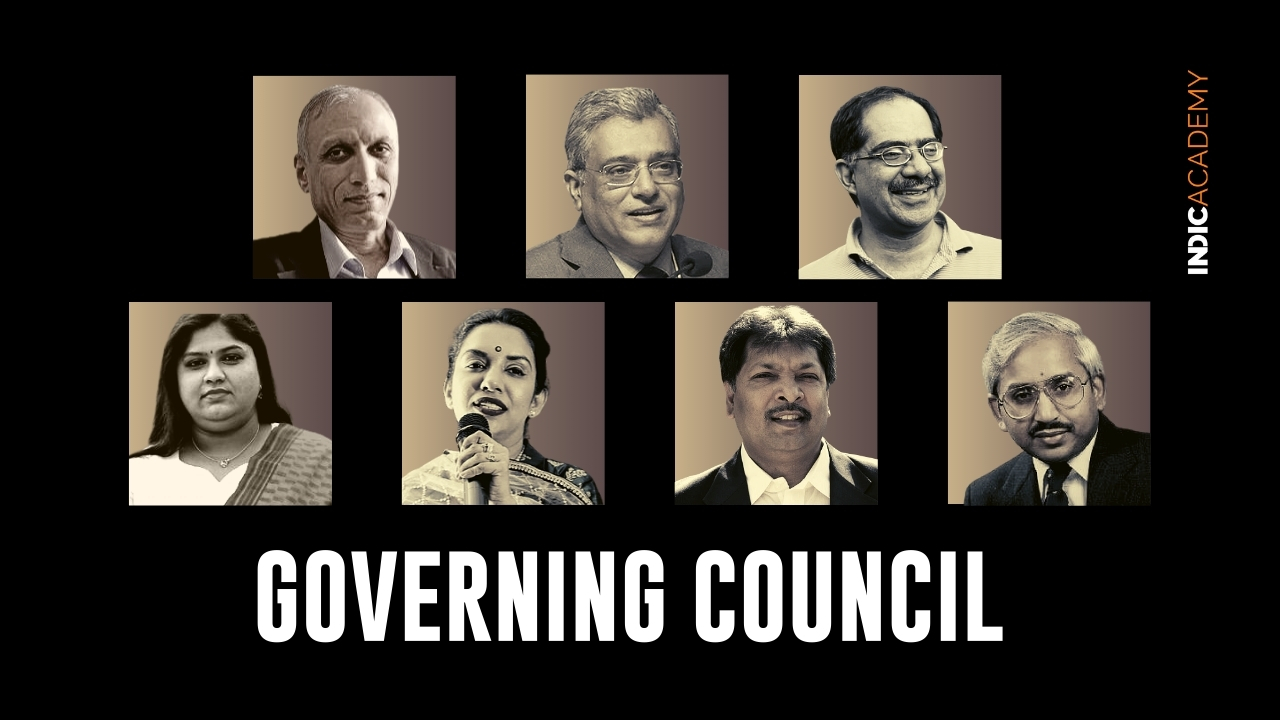 Over the last five years Indic Academy (IA) has been advancing Indic Knowledge Systems through its multidimensional strategy of building Centres of excellences, Transforming Intellectuals and Building an ecosystem. Through its various initiatives and interventions – courses, research, publications, events, platforms, networks, grants and collaborations, IA has emerged as a unique institution for preserving, protecting and promoting Indic civilisational thought across intellectual, cultural and spiritual dimensions.

As IA moves to the next phase of growth, suitable governance structures are being established.  An 8 member Academic Advisory Council to oversee the affairs of the Academy academically was announced last month. Today, as a further step towards building a shared vision and values, and to make decision making process driven, transparent and accountable, we are pleased to announce the establishment of a 7 member Governing Council of Indic Academy.

The Council, comprising the following members, ensures a diversity of institution builders, philanthropists, educationists and strategic thinkers who will contribute towards strengthening the governance pillars of Indic Academy.

MP Kumar,Founder and Mentor at GlobalEdge Software, is driven by a powerful desire for engineering intelligence into things. He was also the former CEO at GlobalEdge, before he stepped down from his active executive role in January 2020. A true visionary, Kumar has been instrumental in building strategic alliances with industry partners and investors. He has helped the company grow since its inception in 1992, enabling close alliances with global enterprises through the journey.With a keen understanding of the dynamics at play in the competitive technology landscape,Kumar steers GlobalEdge to stay well beyond industry standards and market changes. Given his unparalleled experience, Kumar has mentored numerous technology start-ups and is a speaker of renown at several industry forums. With a dream of technological development, he is set on connecting the world with intelligence.

Dr. Rupa Vasudevan, is the Chancellor at BEST Innovation University. A professional Educationist, with 20 +years of vast experience in education management at Institutional, Business school and University level. She is appointed by GOK as one of the top ten academician Executive members of the General council of Karnataka State Higher Education Council, apex body on education in the state and was also involved in planning and implementation of ICT (Information and Communication Technology) initiatives in association with the Government of Karnataka. She is actively involved in skilling and Agricultural development activities and trying meaningful ways in which we can make a difference to our farmers while documenting best practices / traditional agri knowledge systems by farmers from rural areas of South India – the states of Karnataka, Kerala, Tamil Nadu and Andhra Pradesh. Promoting IAIS – International Academy of India Studies, college under Bharatiya Engineering Science and Technology Innovation University which primarily focuses on experiential/immersive study model of our civilizational legacy, India’s culture and heritage, traditional knowledge systems, archaeology, art forms, dance forms. Incepted Just Indic Think Bharata series of workshops that look at exploring, understanding and celebrating the tangible and intangible heritage and will highlight the relevance of ancient systems for contemporary society.Implemented mentoring systems enabling young people to be mentored and thus carve a vision for their careers and help focus them to achieve their life goals.

Prof. Swati Karad – Chate has been the Executive Director at MAEER’s MIT Group of Institutions, Pune since 2006. She possesses a strong administrative strand in establishing and operating various educational units under this conglomerate. She is a Masters’ in Electronics & Tele-Communications Engineering and has attended various Executive programs in Leadership capacities, Potential leadership qualities among Professional Women and in Organizational Leadership.She, being the daughter of the visionary and eminent educationist Dr. Vishwanath D. Karad has made his vision as her mission to create the knowledge hub which imbues the essence of spirituality in every aspect of its learners’ development. She is following the footsteps of her farsighted erudite father. She is leading the march towards developing a completely modern education system with the blend of ancient Vedic wisdom, which could transform young generation into a group of holistic human beings who will be equipped to face this dynamic world by providing excellent technological proficiencies as well as the congenial and conducive environment to grow as ingenious thinkers.

Sharad Sharma‘s mantra is to lead big and small companies through orbit change. He has three decades of experience in the Internet, Enterprise Software, and Digital Infrastructure markets and is a prominent voice in India’s technology ecosystem. He is a passionate evangelist of the software product ecosystem in India. He co-founded iSPIRT Foundation, a non-profit technology think tank devoted to making India a product nation. Earlier, he Chaired NASSCOM Product Forum in its formative years and was a member of the NASSCOM Executive Council from 2009-13. Sharad co-founded Teltier Technologies Inc., a wireless infrastructure startup now part of CISCO, and is an active technology angel investor with over two dozen investments. He was also instrumental in the success of India’s first IP focussed fund, India Innovation Fund. He has held several senior R&D executive positions with leading technology companies, including Yahoo, VERITAS Software, Symantec, Lucent Technologies, and AT&T. Zinnov gave him the R&D Visionary Award in 2008 for his work on creating a strong MNC R&D footprint in India. Sharad is a member of SEBI’s Financial and Regulatory Technology Committee. He has also served on RBI’s UK Sinha MSME Committee and National Digital Payments Committee. He got interested in kernel software development while doing his Electrical Engineering at Delhi College of Engineering. He started India’s first Student Minicomputer Club in 1984 and served as the Chairperson of the IEEE Student Chapter.

P Narasimha is a well-known senior advocate at the Supreme Court of India. He was a former Additional Solicitor General of India. Sri PS Narasimha is well known for his deep knowledge of Indian traditional intellectual traditions. Of the recent Ayodhya case at the Supreme Court, he represented Ram Lalla Virajman, appearing for Mahant Ramachandradas. He was one of the advocates representing the Hindu side who was felicitated by VHP and RSS at Ayodhya after the verdict. A member of the National Legal Services Authority (NALSA), a body that provides free legal services to the weaker sections by organising Lok Adalats, and was recently in the news for his involvement in bringing about major changes in functioning of BCCI as the Amicus Curiae appointed by Supreme Court of India. Sri PS Narasimha is the son of illustrious Justice Sri P Kodandaramayya who played  a very important role in publication of major Sanskrit texts with commentaries in Telugu language through Arsha Vignana Trust and is himself an author on Ramayana and Mahabharata.

Suresh Chukkapalli, as the Honorary Consul General of the Republic of Korea, Telangana enables trade cooperation, facilitates economic relationships and commercial transactions between the state of Telangana and the Republic of Korea. He voluntarily heads a subdivision of the Consulate General of Mumbai to protect and provide support to Korean expatriates in Telangana. Additionally he also promotes scientific and educational cross-cultural pursuits, enables organizations of Korean delegations to Telangana and acts as the liaison officer between said delegations, industries and government in his consular jurisdiction. Apart from this he is also the Chairman Emeritus of  Phoenix Group, one of the leading infrastructure and property developers. In addition to his role as the Head of the Phoenix Group, he is the Managing Trustee of the Phoenix Foundation and Trustee of Chukkapalli Shankar Rao Charitable Trust. Under his leadership and guidance, the group undertakes a wide range of philanthropic efforts as well as community initiatives through ‘Phoenix Foundation’. It was set up with the idea to work for effecting positive changes in the lives of underprivileged children, their families and communities. It has actively participated in projects like Green ‘Telangana Haritha Haram’ program and has distributed saplings for the same.

Ratnam Chitturi is the Founder of North South Foundation (NorthSouth) in the USA. The Foundation is a non-profit organization, all run by thousands of volunteers. It is a virtual cloud NGO with no physical assets. Over the years, NorthSouth provided 25,000 college scholarships to the poorest of the poor in India. In the USA, it conducts competitions among K-12 children in numerous subjects. NorthSouth children dominate the Scripps National Spelling Bee finals and are covered widely in the news and social media every year around the globe. They won the championships for the last 12 years in a row. They also won the championships in the National Geographic Bee for the last 8 years in a row. NorthSouth children were widely featured in theNetflix’s film, “Spelling the Dream.” They were also featured in two books, “Beeline” and “Hyper Education.” More than 250,000 contestants benefited from the NorthSouth competitions. The surplus revenues generated from contests, workshops and coaching fund the college scholarships in India. NorthSouth also conducts contests in India. North South Foundation of India formed in 2004 is a close partner.His working career spanned many multinationals including BP, General Motors, Chase and First Chicago. During his career, he lived in New York, Detroit, Philadelphia, and finally in Chicago where he has been residing since 1984. He has also founded or co-founded many business startups. He received a Ph.D. in Operations Research from New York University, MS in Industrial Engineering from Kansas University and B.E. in Mechanical Engineering from India.