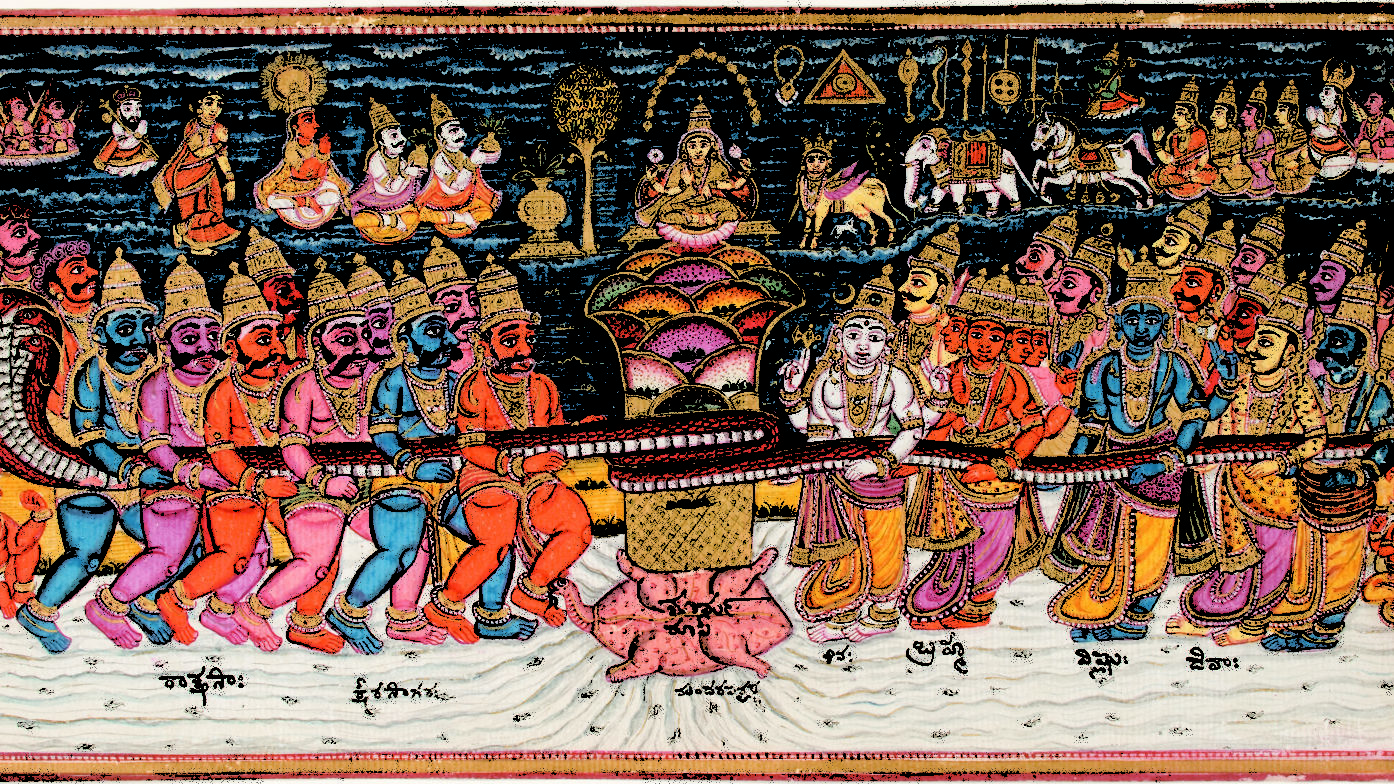 Indic Academy is pleased to invite scholars and public intellectuals to submit papers for a Conference on Puranas and Indic Knowledge Systems scheduled on March 26-27th.

The word ‘puranas’ ( pura̅ṇas ) is usually translated as ‘mythology’ or ‘Hindu mythology’ in English. Mythology is a collection of myths, and ‘myth’ in its neutral sense is defined as a traditional sacred narrative of a community. In its pejorative sense, it is used to denote a commonly believed but false idea.  Many Hindus take offense to the translation of Puranas and  Itihasas like Ramayana and Mahabharata as mythology as they see this as calling their sacred narratives as commonly believed but false stories. But the bigger problem with the translation of Puranas as mythology is that it makes Puranas as a collection of only narratives. Puranas are neither just a collection of narratives and the narratives in the Purana texts are not false ideas.

Puranas as an Encyclopaedia:

Those who are acquainted with the texts of the Puranas, the aṣṭa̅das̕a maha̅ pura̅ṇas , the 18 major Puranas or the upa pura̅ṇas, the minor Puranas, or the texts of itihasas like Mahabharata and Ramayana which are included in Puranas(for example,  by Rajasekhara in Kavyamimamsa) know that the texts contain a great portion of non-narrative expositions too and as such know that it is wrong to view or understand Puranas as just collections of stories. It is common in scholarly circles to refer to Puranas like Agni Purana while discussing topics like poetics. Puranas like Matsya Purana are referred to for the sources of the field of Hindu Temple Architecture. Chitra Sutra, the section on the field of drawing and painting in Vishnudharmottara Purana is well known. Discussions on Governance, Public Finance, Correctional Administration etc., in Itiahasas and Puranas is also well known. Cosmological discussions in Puranas have also caught the notice of contemporary cosmologists. Historians consult Puranas as literary sources of historical research. The list can go on.

Northrop Frye in his book, Anatomy of Criticism discusses the growth of Encyclopaedic Literature and cites Mahabharata as an example. Mahabharata claims its own encyclopaedic nature in its own prefatory part. In fact, the entire corpus of Puranas is encyclopaedic in nature.

In premodern India, study of Puranas was one of the means of learning knowledge systems.

It is popularly believed that Mahabharata is called the fifth Veda. In fact, the entire corpus of Puranas is called Panchama Veda, the fifth Veda. One of the prime reasons for such position /characterisation given to Puranas is their being sources of Vedic Knowledge Systems.

In contemporary times, there is a pressure on scientific and scholarly community to share their technical knowledge with common public in a popular style. Puranas, in their prefatory portions claim that the purpose of composing Puranas is the dissemination of rigorous Vedic Knowledge Systems in a popular style. This is one of the justifications provided in the prefatory parts of Puranas for why the corpus of Puranas is viewed as the fifth Veda, though the most well known justification is that Puranas are compilations of Vedic content that was left out after classifying the Vedas into the four divisions, Rigveda, Yajurveda, Sama Veda and Atharvana Veda.

Function of Puranas of serving as sources of Knowledge Systems is intricately connected to or inseparable from their function of guiding the cultural and spiritual life. As popular or made easy ‘versions’ of the Vedas, Puranas too serve the functions, served by the S’ruti = Vedas, of guiding towards Dharma, cosmic order and human life principles and life style in consonance with that order and Moksha, the freedom or liberation from sorrow and death based on the understanding of Aatman, the self and Bramhan, the cosmic essence. It is because of these two aspects being based on the understanding of cosmic order and cosmic essence, these functions of guiding life and beyond life, which are viewed as ‘religious’ and ‘spiritual’ functions are closely connected to and are very well founded on the ‘sciences’ of cosmos and its parts and aspects. This is what makes the Puranas have the distinctions between ‘science’ and ‘religion’ dissolved or redundant.

Significance of Purana Studies for Hinduism and its Studies :

True to their claim in their prefatory portions, Puranas are closer than the Vedas to the popular Hinduism or Hinduism of the masses from millennia through contemporary times. Hindu divinities, their temples and their worship methods, Agamas, the shastras about these Hindu divinities, their temples and their worship methods are more closely or directly connected to Puranas than to Vedas. Many aspects of Hindu culture are connected to the Vedas most often indirectly through the bridge of the Puranas. It is the Puranas that connect or reflect the connections among the different strands of the Hindu cultural complex, such as the Vedic, Marga (classical), Desi (folk and/or tribal) as a unified whole.

From centuries, Hinduism’s roots in the Vedas have most often been working through the Puranas, making it difficult to separate, reconstruct a ‘pure’  ‘original’ Vedic aspects. In spite of attempts in the nineteenth century to reconstruct and revive a ‘pure and original Vedic culture’ ‘cleansing’ Hinduism from a ‘Puranic contamination’ through movements like Arya Samaj, majority of Hinduism still continues to be Puranic.

All the Vedic traditions of skills, knowledge systems, cultural and spiritual practices take the Vedas as the mula = foundation of their traditions and pramana = basis of their decisions about validity of claims and arguments. Many of them do not give such a central status to other sources such as Puranas. But certain Bhakti traditions give Puranas too, a status equal to Vedas as mula and pramana. For such traditions, Purana studies are as central as Veda studies.

There have been attempts to search for the usefulness or lack of it of Puranas in terms of contemporary knowledge. It has been, in a way, an attempt to validate or invalidate the content of the Puranas on the basis of agreement or disagreement of the Puranic content with the understandings from the contemporary sciences. The devout opposed such attempts from the perspective that Puranas are religious books and should be left as such and should not be tested for validity on the touchstone of science which has a different domain than religion. But as mentioned earlier in this note, in the case of Hinduism in general and in the case of Puranas in particular, since the European modernity born conflict between science and religion is superfluous or redundant, such arguments are not necessary in the case of Puranas. Nevertheless, it is wrong to look for one to one equivalences in the methods of knowledge systems of two different spaces and times. Contemporary divisions of knowledge into different academic disciplines itself has its own cultural roots. As such, an ancient Indian knowledge system may not have its exact equivalent among the contemporary academic disciplines. This applies not only to the study of the ancient Indian knowledge systems as contained in the Puranas but to the study of ancient Indian knowledge systems in general as contained in various Sastric and other kinds of oral and written texts and practices. Thus it is more sensible to look for the knowledge and knowledge systems as found in the Puranas in their own right and see if some or all of the knowledge there is covered or not covered by one or more of the contemporary disciplines.

Contemporary knowledge systems such as Anthropology and Psychology and certain contributions from western Philosophy and Literary Criticism have contributed to favourably understand the myths and mythological narratives from various texts and cultures and their relationship with the rituals and other cultural elements in those cultures. Dr Nagaraj Paturi in his PhD dissertation brought out Vedic Knowledge System based parallel / alternative to such contemporary myth theory.

Analytical conceptual tools from poetics such as metaphor, allegory etc. have been applied to make sense of such narratives. Swami Dayananda Saraswati , the founder of Arya Samaj applied such tools as lakshana = metaphor, alankaras = figures of speech to interpret narratives in Veda mantras as revelations of scientific truths. Rahasyartha prakasha (mystic meaning exposition)  books have been composed from centuries about the Puranic narratives including those of Ramayana, Mahabharata and Bhagavata.  Dr Nagaraj Paturi included a more comprehensive poetics section in his Vedic model of myth theory. All these understandings help in grasping narrative portions of Puranas too as narrative expressions to the knowledge in various knowledge systems.

Indic Academy would like to bring the scholars working on Puranas from the perspective of Knowledge Systems on to the same platform and highlight this aspect of Puranas to the general public  through its online conference on 26th & 27th March, 2021. Scholars are invited to send their abstracts to namaste@indica.org.in before 15th  February, 2021 and full papers before 10th March, 2021.

Selected papers from the conference shall be brought out as an Indic Academy publication.