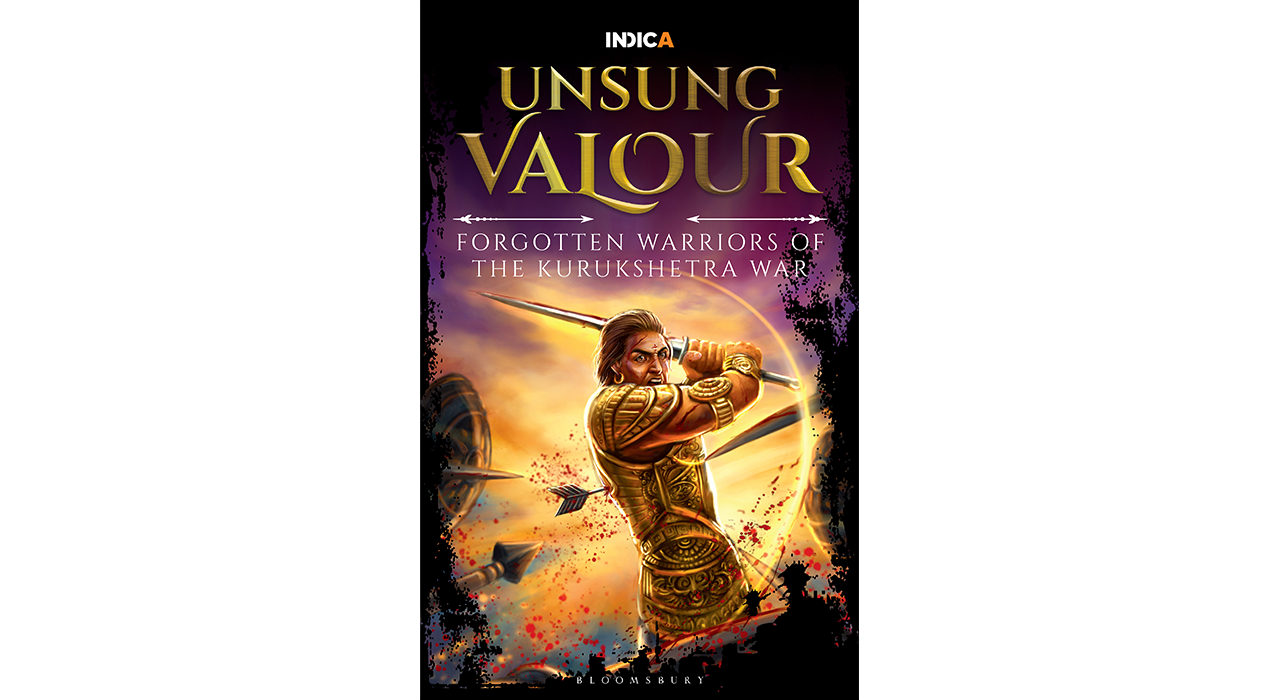 I am delighted to announce the release of “Unsung Valour- Forgotten Warriors of The Kurukshetra War”, the first of the short story anthologies based on Mahabharata.

The Battle for Dharma. It is a word synonymous with any epic confrontation, so entrenched in popular memory that even the word brings the sounds of conches and battle bugles to our minds. The battle raged for 18 days, on the field between warriors, in the minds of these warriors, about Dharma and Adharma, their dharma and a larger Dharma. It was a battle at spiritual, mental and physical levels.

The wondrous element of this epic battle is in its detail. Among the ~80,000 shlokas of the critical edition of Mahabharata (BORI), 22900+ shlokas, a whopping 29% are dedicated to the war chapters! It was one such attempt to realise the scope and detail that gave birth to this anthology. It started with my documentation of individual and cumulative battles that happened on the battlefield of Kurukshetra. About 466 confrontations were recorded with 216 going in the favour of the Pandavas and 92 battles going in favour of the Kauravas. The quantitative study was a striking contrast to the popular imagination cemented by later imaginations. A stunning aspect of this study was that about 25% of the victories on both sides were contributed by warriors who aren’t given their due in popular imagination. Be it the fearsome veteran Bhagadatta atop his valiant elephant Supratika or the youngsters Iravan Prativindhya and Yudhamanyu putting forth their best, giving away their everything for their Dharma, their tales are lost in the detail that is seldom recounted. I made a twitter thread detailing all these battles, seeing which Hari Kiran, founder of Indic Academy first asked me to write a post for Indic Today and then came up with this game changing idea of galvanising re-imagination of such lesser known battles in the epic war asking a simple question ‘What were the thoughts of these warriors in the morning of their battle and the biggest day of their lives?’.The result was a short story competition on the topic Announcement where ten promising writers (including a 13 year old high schooler!) were chosen for their passion, their devotion towards Mahabharata and their perseverance (in attending to reviews and rewrites!). Once chosen, all the writers went through a 5 day online workshop after which each of them fine-honed their beloved pieces of art with the craft of storytelling.

The stories written are such retellings pregnant with their poetic re-imagination while keeping the word of Bhagavan Vyasa firmly entrenched in each of their hearts. Reading each of the stories filled my heart with admiration and humility. Coming from various walks of lives, across the world, connected by the root of India’s rich heritage, the writers have presented their creative works on the untold battles of Kurukshetra. Each of the stories delves into the warrior’s internal struggles, external obligations, call of the soul, all culminating during their defining battles.

The writers deserve all encouragement and appreciation for their untiring efforts and passion. I pray for the blessings of Bhagavan Veda Vyasa upon them all and invite you, the readers to journey through the world of Kurukshetra from the perspectives of warriors, some of whose names would not even have found a mention in abridged retellings. Experience this unique storytelling and spread a word among your circles for we are all the inheritors of this immortal legacy!

I am also happy that Bloomsbury India is publishing this anthology. For these ten authors this entire journey culminating with debuting their work through a mainstream publisher will surely encourage them to write even more and explore their skills and through this exploration their very Self.

Here is the buy link on Amazon. The Pre orders will be up soon and the same would be launched in November 2020. You would not want to miss these well-crafted passionate stories inspired by the immortal work of Bhagavan Veda Vyasa.